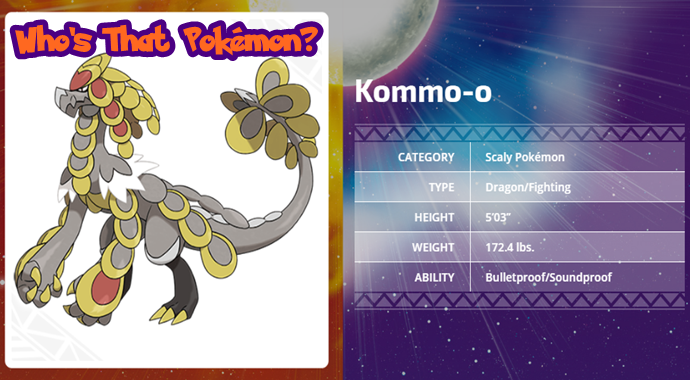 Welcome back to Who’s That Pokémon? the feature series regarding the Pokémon we can expect to see in the upcoming games. From Rowlet to Tapu Koko, and Drampa to Ash-Greninja, we have covered them all, but now we have another eight Pokémon to cover, so get ready for another instalment of Who’s That Pokémon? We dedicate this edition to Hakamo-o’s evolved form, Kommo-o!

Description: “At the end of its harsh training, Hakamo-o evolves into this overwhelmingly powerful form. It returns to the land of its birth, where it watches over the Jangmo-o from a distance.

There is a legend that says Kommo-o is covered in glittering scales in order to drive away a great darkness covering the world. The reason these Pokémon seek out battle is to gain the power needed to defeat this darkness. When it detects someone approaching, this Pokémon rings the scales on its tail to announce its presence. It has no desire to battle against weak Pokémon.

Kommo-o’s greatest move is the uppercut. It swings its arm up from below in a punch of great skill and force, sending its foe flying into the sky. By raising its arms aloft, it can generate a force powerful enough to change the face of the surrounding landscape!

Clanging Scales is a move that only Kommo-o can learn. It scrapes the scales covering its body against one another, attacking with a great clamor. After using this move, Kommo-o’s Defense is lowered.”