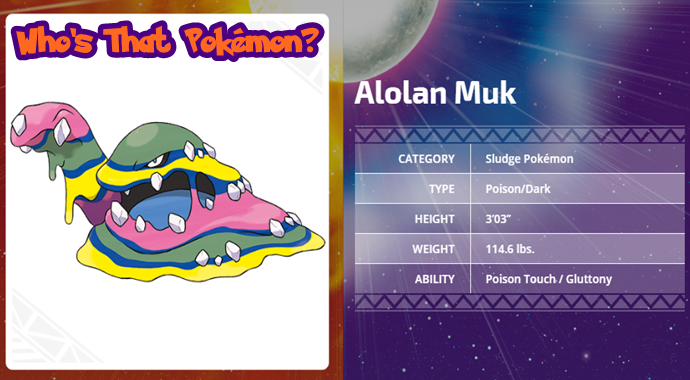 Welcome back to Who’s That Pokémon? the feature series regarding the Pokémon we can expect to see in the upcoming games. From Rowlet to Tapu Koko, and Drampa to Ash-Greninja, we have covered them all, but now we have another eight Pokémon to cover, so get ready for another instalment of Who’s That Pokémon? We dedicate this edition to the second of two recently revealed Alolan Pokemon, Alolan Muk!

Description: “Alolan Muk eats whatever is in reach without pausing, and if it feels the sharp pangs of hunger, it runs amuck. It’s thought that its voracious appetite stems from an inability to maintain its energy levels without a constant influx of toxins. Toxins have accumulated in Alolan Muk’s body from its steady diet of various waste products and manufactured materials. This accumulation has brought about a chemical change, producing a new kind of toxin.

Alolan Muk has the same poisonous crystals as Alolan Grimer, but they’re not limited to its mouth—they extend from all over the surface of its body. Alolan Muk uses them to attack, just like other Pokémon use their fangs or claws. And these highly toxic crystals are easily knocked loose, making them extraordinarily dangerous!


Categorised in: Pokémon Sun & Moon, Pokemon, Who's That Ultra Beast?