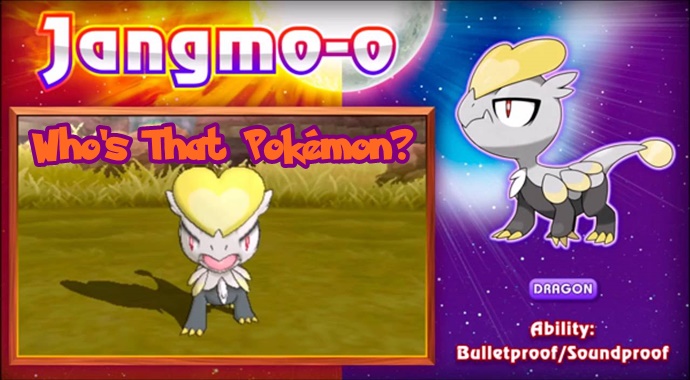 Welcome back to “Who’s That Pokémon?” the feature series regarding the Pokémon we can expect to see in the upcoming games. From Rowlet to Tapu Koko, and Drampa to Stufful, we have covered them all, but now that more Pokémon have been revealed this month, its time they got their own instalment of Who’s That Pokémon? So join us as we do a post all about Jangmo-o!

Description: “Jangmo-o has the pride of a warrior, although it remains humble about its capabilities. In its pursuit to become stronger, it never neglects its training.

Because Jangmo-o uses the scales on its head for both offense and defense, it never turns its back to its enemies. Many Trainers see this behavior and take it as proof that Jangmo-o is a valiant Pokémon.

Jangmo-o gather in harsh locales like canyons, where no other people or Pokémon are around, to live together as they train.”