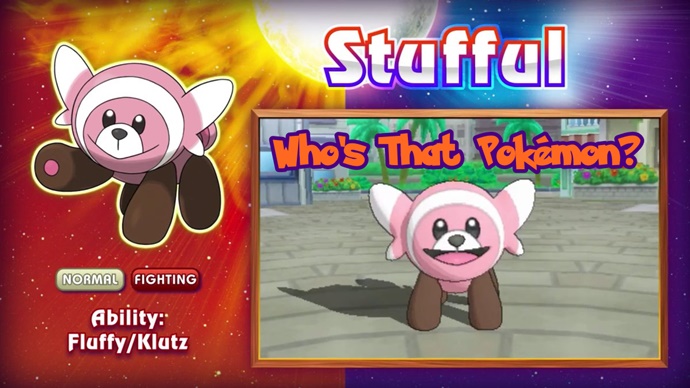 Welcome back to “Who’s That Pokémon?” the feature series regarding the Pokémon we can expect to see in the upcoming games. From Rowlet to Magearna, and Tapu Koko to Alolan Raichu, we have covered them all, but now that another Pokémon have been revealed this month, its time they got their own instalment of Who’s That Pokémon? So join us as we do a post all about the last Pokémon from the new batch, Stufful!

Description: “Stufful’s cute appearance and movements—plus the fluffy feel of its fur—all combine to make it super popular!

This Pokémon may have a small body, but its strength is extraordinary. Receiving one of its powerful hits without being prepared for it can bring down even well-trained Pokémon!”

“The truth is that Stufful doesn’t really like being touched. It hates being hugged tightly and will flail its arms in protest.”