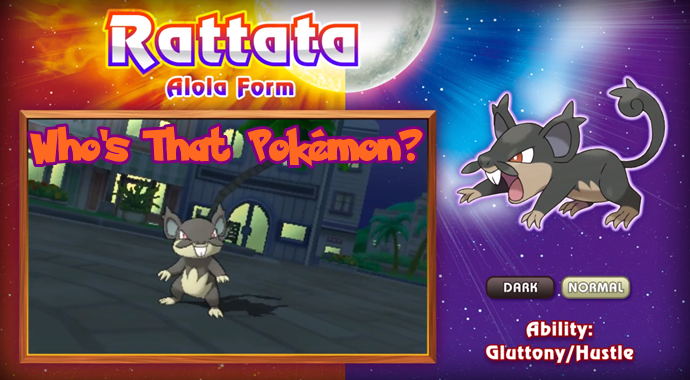 September 8, 2016 9:13 am Published by Jack Longman Leave your thoughts

Welcome back to “Who’s That Pokémon?” the feature series regarding the Pokémon we can expect to see in the upcoming games. From Rowlet to Tapu Koko, and Drampa to Stufful, we have covered them all, but now that more Pokémon have been revealed this month, its time they got their own instalment of Who’s That Pokémon? So join us as we do a post all about Alolan Rattata!

Description: “Alolan Rattata’s form changed as a result of their battle for territory with Yungoos.

Unlike ordinary Rattata, urban areas are Alolan Rattata’s main habitat. They are nocturnal and live in nests of several dozen. Alolan Raticate serve as their bosses.

As a countermeasure to the exploding Rattata population in the Alola region, Yungoos were imported and released. To better avoid Yungoos, Rattata changed their preferred environments and circadian rhythms. These adaptations to their new environment led to a changed form.

Alolan Rattata have an excellent capacity for sniffing out delicious fresh foods in Alola. They pay no attention to foods that aren’t fresh.”