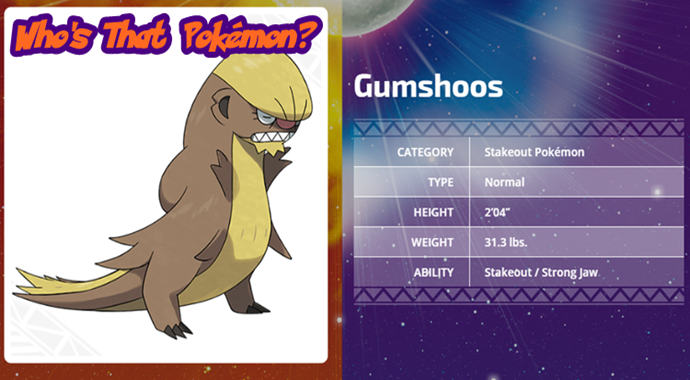 Welcome back to “Who’s That Pokémon?” the feature series regarding the Pokémon we can expect to see in the upcoming games. From Rowlet to Magearna, and Tapu Koko to Mudsdale, we have covered them all, but now that a huge amount of new Pokémon and Alolan versions of Pokémon we’ve already seen before, it’s time for a lot of new additions of Who’s That Pokémon? and in this particular post to get us started with the new batch, it’s all about Gumshoos!

Description: “Gumshoos’s method of targeting prey is the exact opposite of Yungoos’s strategy. While Yungoos prowls around, Gumshoos stakes out its prey’s usual routes and waits patiently for it to come by.

Gumshoos has a tenacious personality, which is why it targets one prey for so long without wavering. But when the sun goes down, it runs low on stamina, falling asleep right on the spot. Gumshoos can withstand a great deal of hunger. It’s able to stay perfectly still while waiting for its prey, keeping watch without eating a thing.”