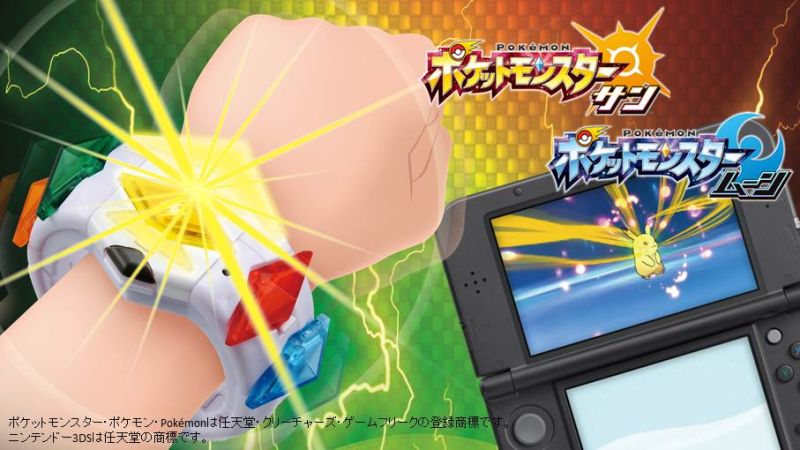 During our coverage of yesterday’s Sun & Moon news, we went into detail with regards to the Z-ring, a Key Item that enables Trainers and their Pokémon partners to use one Z-Move per battle and a real world item too. We also promised should any more news regarding the real world version being made by Tomy International, come to light, we’d do a follow up, so this is that follow up.

Now just in case you missed yesterday’s reveals, or don’t quite grasp what Z-Moves, Z-Rings and Z-Crystals are and do, you might want to read this and the paragraph that follows. But If you feel you know enough already, feel free to skip the following explanation:

So Z-Moves, they are pretty much the ultimate move and something you can only use once in battle. Every Pokémon is capable of using a Z-Move and there is a Z-Move for every Pokémon type, but it’s not that straight forward. In order to use a Z-Move you will need the following things, A z-Ring, Z-Crystals (Spoiler Alert! There’s one for every type) and a Pokémon who knows a move of the same typing to their kind of Z-Move and equip them with the right Z-Crystal. (No good trying to use a Water-type Z-Move for your Water-type Pokémon, when that Water-type Pokémon doesn’t know a single Water-type move and have a Water Z-Crystal attached.)

Now back to the Z-Ring that is being made by Tomy. We already know it lights up, vibrates and makes sounds when Z-Moves are being used in the Sun & Moon games, but now we know that, just like in the games, there are 18 Z-Crystals for fans to collect, as each collectable crystal, works with its corresponding type. We also now know that the Z-Ring itself will cost 2,600 yen ($25.60 US dollars) and comes with 1 Z-Crystal. There will also be Z-Crystal sets also available for purchase (3 differing crystals in a set) and is priced at 599 yen ($5.90 US dollars.) There will also be a special bundle that consists of 1 Z-Ring and 6 Z-Crystals, which will retail at 4,490 yen ($44.19 dollars.)

To me, the special bundle doesn’t sound all that special when you could buy the Z-Ring separately and two sets of crystals (resulting in you ending up with 7,) for less money it will cost you to have the device and 6 Z-Crystals, so maybe they will reconsider their prices closer to the day, which for Japan, will be around November 18th when the games see their release. (As of this moment, though it is stated the toy and associated parts will be coming to other areas, no release date or further details have been given, but they are expected to be revealed soon.)

Should any more information come to light, we will continue the story once more, but until then, this is all we have to report for now.