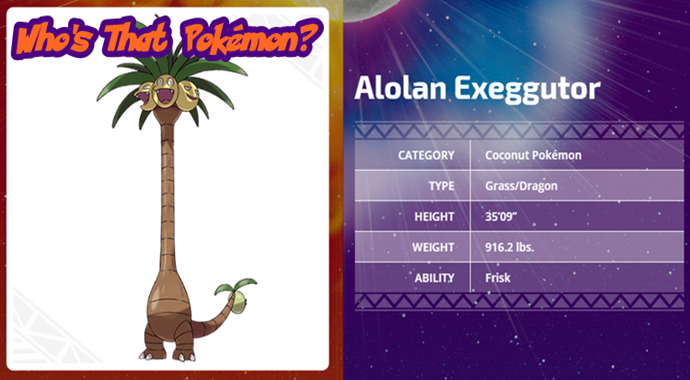 Welcome back to “Who’s That Pokémon?” the feature series regarding the Pokémon we can expect to see in the upcoming games. From Rowlet to Magearna, and Tapu Koko to Mudsdale, we have covered them all, but now that a huge amount of new Pokémon and Alolan versions of Pokémon we’ve already seen before, it’s time for a lot of new additions of Who’s That Pokémon? and in this particular post, it’s all about Alolan Exeguttor!

Description: “The environment of the Alola region, where strong sunlight pours down all year round, brought about this change in Exeggutor’s form. The people of Alola boast that the Alolan Exeggutor is the true form of Exeggutor.

Unlike other Exeggutor, the Alolan Exeggutor has a fourth head—on its tail! This fourth head controls the tail independently and can take on opponents to the rear that can’t be reached by the main heads’ attacks.

This Pokémon excels at whipping its long neck like a lash to attack with its hard heads. But that neck can sometimes become a weakness…”