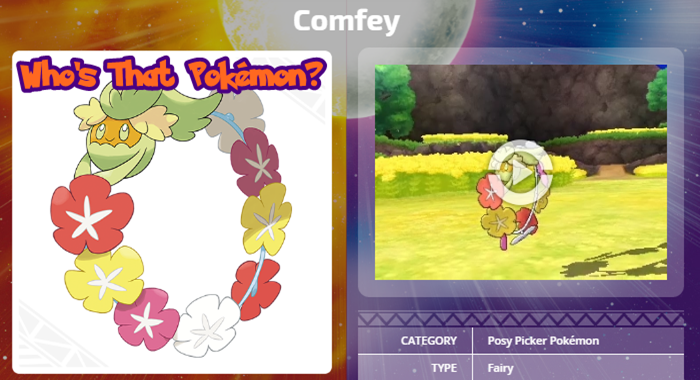 Welcome back to “Who’s That Pokémon?” the feature series regarding the Pokémon we can expect to see in the upcoming games. From Rowlet to Magearna, and Tapu Koko to Salandit, we have covered them all, but now that 6 new Pokémon were just recently revealed, it’s time for some more additions of Who’s That Pokémon? and in this particular post, it’s all about Comfey!

Description: “Comfey picks flowers and always carries them around. It makes a ring of blossoms and spreads oil from its body on it, which changes the flowers so they emit a soothing fragrance. It has a habit of giving these flower rings to those it’s fond of. The aroma can soothe both itself and its allies. Comfey also helps with the treatment of people and Pokémon at Pokémon Centers and hospitals, thanks to its aroma.

When attacked by other Pokémon, it throws its flowers at them to create an opening, and then it either flees or strikes back.

Comfey can have the new Triage Ability, an Ability that no other Pokémon has had before. With the Triage Ability, this Pokémon’s restorative moves gain the highest priority in battle.”