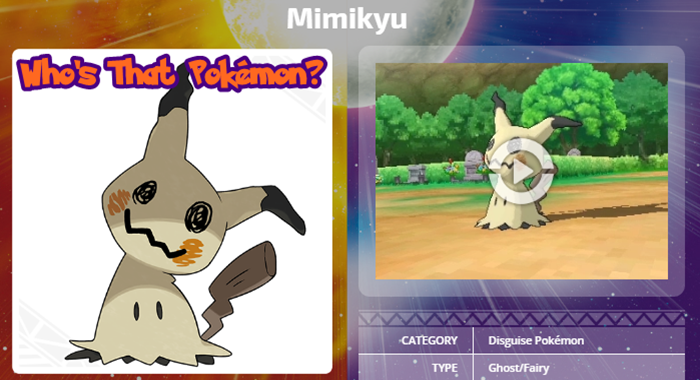 Welcome back to “Who’s That Pokémon?” the feature series regarding the Pokémon we can expect to see in the upcoming games. From Rowlet to Magearna, and Tapu Koko to Salandit, we have covered them all, but now that 6 new Pokémon were just recently revealed, it’s time for some more additions of Who’s That Pokémon? and in this particular post, it’s all about Mimikyu!

Description: “Mimikyu lives its life completely covered by its cloth and is always hidden. People believe that anybody who sees its true form beneath the cloth will be stricken with a mysterious illness. People in the Alola region are convinced that you must never try to peek beneath its covering. Mimikyu’s health fails when it’s bathed in the rays of the sun, so it prefers to stick to dark places. It’s rumored that the reason it covers itself with a cloth is to avoid sunlight.

The rising popularity of Pikachu-styled merchandise around 20 years ago is the reason that Mimikyu makes itself look like Pikachu. In fact, this Pokémon is dreadfully lonely, and it thought it would be able to make friends with humans if only it looked like Pikachu.

Mimikyu has the Disguise Ability, a new Ability that no Pokémon has ever before possessed. The Disguise Ability allows it to escape damage from an enemy’s attack just one time, and then its appearance changes.”

“Mimikyu’s Pikachu-like appearance is due to its Disguise Ability. In order to resemble Pikachu, this Pokémon makes patterns that look like eyes and a mouth appear on a regular scrap of cloth.”