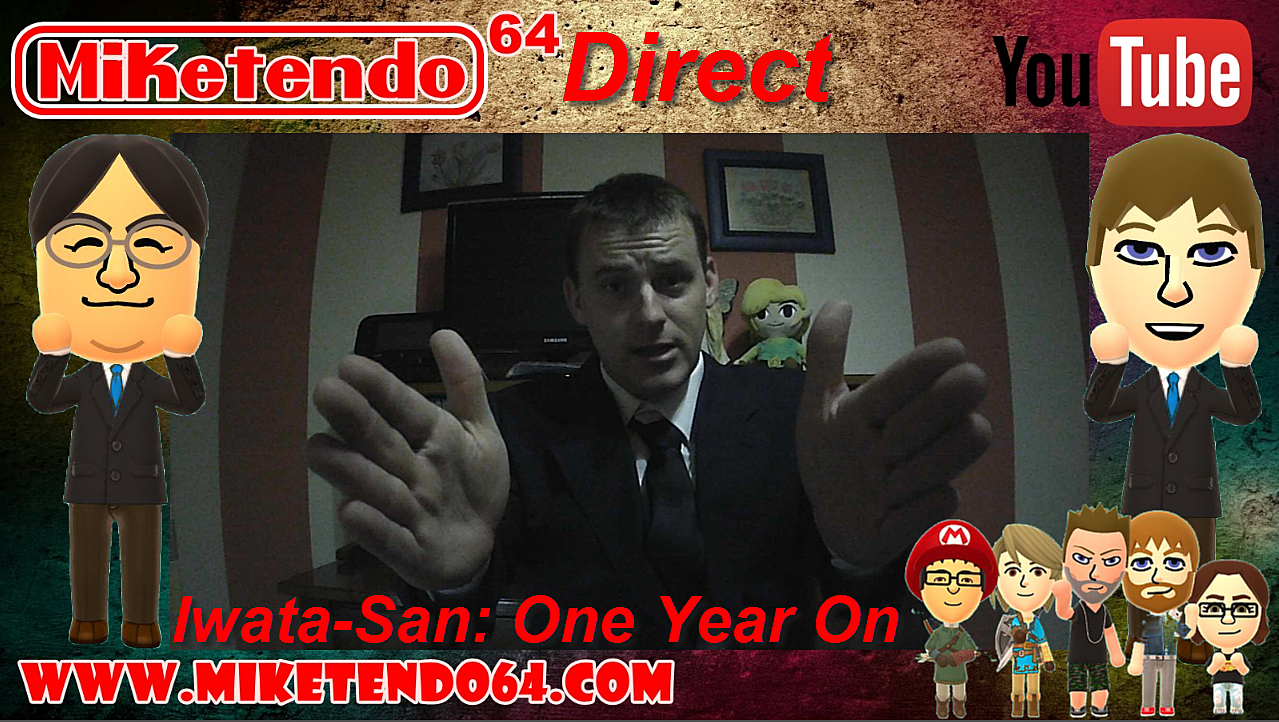 It has been a year since Ex President of Nintendo, Satoru Iwata passed away. He was an inspiration to everyone including fans and competitive developers alike. He brought great joy to many a Nintendo fan with amazing games and consoles under his guidance. He was highly capable of turning many misfortunes around and making them a success. He saved Hal Laboratory from Bankruptcy and saved Nintendo many a time through financial difficulty by cutting his own salary to keep workers from facing the sack. He was truly an everyman and a role model to look up to, and would no doubt have turned the stigma surrounding the Wii U around if he had just a little more time.

It is a great shame that he passed away when he did as I will never get the opportunity to meet the man and tell him personally how much I appreciate his work and his achievements. I am a Nintendo fan through and through and it is down to the hard work of Satoru Iwata, Shigeru Miyamoto and Eiji Aonuma. To commemorate the man and pay our respects. The Miketendo64 team have a few words they would like to say as well as some of our followers and fans which can be read below or listened to in our Miketendo64 Direct, to say thank him for his efforts, to thank him for the joy he has brought us with his love of videogames, for the path he chose in life that has inspired others to follow their own path rather than the one chosen for them.”

“What can I say about the man who was a Legend whilst he was alive, and now even more so now he is gone? Everything he touched was magic and he was behind some of my most beloved games, such as being the Producer for Pokémon Snap and an Executive Producer for Endless Ocean. He is a man who gave his life to the industry and gave us a ton of great games and although he may be gone, at least his life’s work is still here for us to continue to enjoy. You are missed Iwata-san but never forgotten.”

“On July 11, 2015, I was looking up Nintendo news like any other day. One headline caught my interest: Satoru Iwata, president of Nintendo, has passed away. My heart skipped a beat. Surely, this was some kind of joke. I couldn’t believe the man I had been following through hours of Nintendo Directs could be gone. I read and reread the article, hoping that something would change. After one final reread, my heart sank. I needed a moment alone to process everything. Suddenly, my eyes watered up, and I began to cry. I couldn’t believe I was shedding tears for a man whom I didn’t know personally. But it was happening. Iwata meant so much to me that I couldn’t help but weep for his passing.

Since then, I’ve realized why his death had such an impact on me. Iwata was the first president of Nintendo who was willing to open himself up so much. In both Japanese and English, he delivered Nintendo Directs with a pleasant tone and a warm smile. He was the kind of personality you were willing to invite into your home through Directs. He understood his audience, even when the gaming public did not. When he first came back after a year of absence from Directs, his body didn’t look like it was in the best shape. It was clear he was going through something. But when you listened to him talk about Nintendo, you could never tell that anything was wrong. Iwata was as happy as ever, even during the last time we saw him, when his likeness was immortalized into an adorable puppet.

Iwata did so much amazing work for Nintendo. I will remember him most for who he was: a passionate president who cared about what he did, a personable man who seemed pleasant to talk to, and the one who brought Nintendo “di-rectly” to us.

“Iwata just want to thank you for everything you did and for making my childhood so happy. Your legacy will live on and I know its been a while since you left but you will always have a place in our hearts.”

“In a time when corporate interests superseded the satisfaction of the gaming community, you gave of yourself to save the jobs of the creative force at Nintendo to continue the tradition of games that bring joy and satisfaction to all who would indulge in it.

You defied conventions and expectations of the corporate and gaming communities and, in turn, gave us experiences that are far more memorable than we could’ve ever hoped for. True to your words, you ran towards risk – not away from it.

It is doubtful we will ever be graced by the presence of a man such as yourself – with the passion and heart of a gamer – and we miss you dearly, Iwata-San. May your passionate spirit as a gamer live on in all of us.

“We all must have a favourite game he was involved in. For me its Animal Crossing New Leaf in which he was the executive producer. Animal crossing is one of Nintendos biggest sellers and offered something unique to players. He often said that his games should appeal to a broader audience and they often did. I still play New Leaf to this day after three years since release. Most of the games he has worked on stand the test of time. He was intelligent and creative and not easily replaceable. He worked hard in the video game industry and I hope he is resting now”

“Iwata-San was not only an amazing Nintendo president, but he was an amazing man and an amazing developer. One of the most influential games in my life is Earthbound. It’s an incredible game that has brought me tons of inspiration. Iwata-san has been and will continue to be missed.”

“As someone who jumped back into Nintendo only 3 years ago, I didn’t get to know Mr. Iwata too well. What I did know about him, however, was truly magical. The night I had found out he passed away I was truly devastated; because not only did the game industry lose one of its most esteemed members, we lost a human being. Through the Nintendo Directs, Nintendo truly humanized their staff; we really got to know them. They weren’t nameless, faceless suit-and-ties, they were Reggie Fils-Aime, they were Bill Trinen, and they were Satoru Iwata. I would like to personally thank Mr. Iwata for Pokémon Gold and Silver, Balloon Fight, and Kirby. It’s hard to believe it’s been a year since his passing. Rest in peace Mr. Iwata, you will forever be in our hearts.”

“I think back to Iwata-san and the impact he has had on me, so many of the franchises I love were influenced by him and it is hard to believe that he is no longer a guiding force behind them. Iwata-san was not only the face of HAL Laboratories (which is a name I remember from my childhood when I got Kirby’s Dreamland on the original Game Boy) but also his presence on Nintendo Directs is still sorely missed. He was warm and charming. Iwata-san brought us the Japanese humor that so many video game players love and made Nintendo as a company feel like a close personal friend which is no small accomplishment. As I look forward, I think Iwata-san had a vision for Nintendo and guided the company towards the NX. Many people question or just wonder what Nintendo can do to become a leader in the video game market once again but I believe in both the company, who will be around for many years to come no matter how the NX does, but also that Iwata-san’s vision will bring fun to millions of people across the globe. When I reflect about his legacy I’m filled with many emotions. Sadness because he is gone and that is still hard to accept. Nostalgia for the all of the fantastic games he helped create and that I enjoyed. Happiness because he impacted so many people in a positive manner. Finally, gratitude because he shared his talent with all of us and enriched our lives and for that he will always hold a place in our hearts.”

“Satoru Iwata was a legend in the video game industry. His vision fueled the production of many successful franchises and the development of some of the more recent Nintendo consoles and handhelds. He will always be revered as a pioneer amongst those of us who will remember his legacy. Thank you, Iwata-San.”

“It’s simple, Mr Iwata was a great man who loved making games for so many people. He gave his everything he could to make people happy and gave so many happy moments in our lives and I won’t forget the first time he shocked us with the reveal of the Wii right out of his jacket to the awesomeness of the DS and i will always miss Mr Iwata and the joy he gave us all..God bless and R.I.P Mr Iwata.”

“Mr. Iwata had a huge impact on Nintendo. I really don’t think Nintendo would be what it is today if it weren’t for him. Not only was he so passionate about Nintendo, but he also cared deeply for his coworkers. It’s not often that you find a person like him. He is missed by many.”

Satoru Iwata, Thank you for Pokemon, For Kirby, For Smash Bros & Balloon Fight, You are a hero to us and have allowed us to be heroes as well through our love of videogames.”

3 thoughts on “Satoru Iwata: One Year On (Miketendo64 Direct Video)”