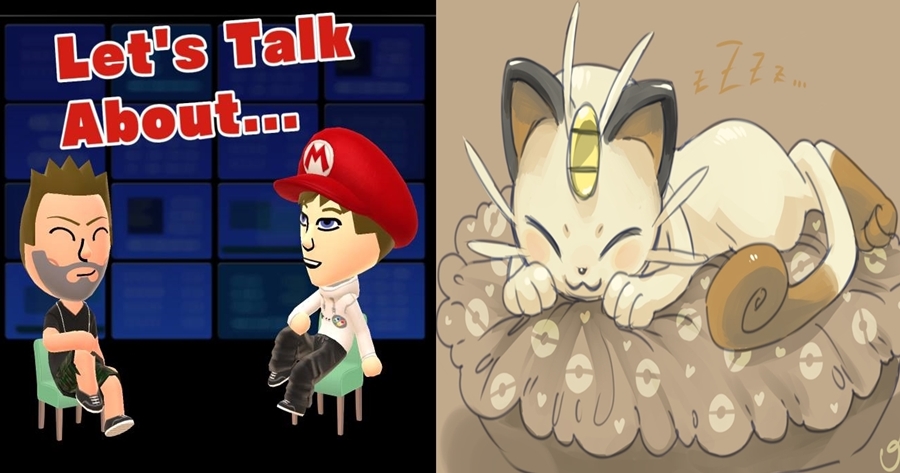 Let’s Talk About: Meowth (Why His Inclusion in Sun & Moon Matters)

Hello and welcome to the 3nd edition of Let’s Talk About, our new series of discussion posts and videos dedicated to all things Nintendo! Be it a singular game, a series in general, consoles or even just Nintendo’s latest actions. In today’s piece we are heading into the world of Pokémon, specifically the Alola region and discussing why Meowth’s presence matters!

Me personally, I have never been a fan of this Gen I Pokémon. I caught enough of them during my Red days and whenever I saw him in the anime I would roll my eyes. To me he was a talking cat and I didn’t really want to know more, but now he is so much more than that and I am going to explain why. Last week we got to learn who the starters for Sun & Moon will be, we learned their names, their types but not their evolved forms. We also got to see Solgaleo and Lunaala (official names not yet given) and that was about it, until it wasn’t.

Among the other footage that also came out during the week, we got a glimpse of a new Pokémon lurking of to the left of the screen, a Pokémon that many have specified to be either a Normal-type Eevee evolution or a unevolved form of Stantler. Different opinions aside, we can all agree on two things, the first being the new Pokémon is a Normal-type and that it stands on all fours. However this wasn’t the only Pokémon we got to see because there was also a less than a second clip of a Meowth! Since this fact came to be known, quite a large number of those in the Pokémon community seem to have the same reaction: “So what? It’s just Meowth.” As someone who isn’t a Meowth fan, even I think this reaction is a bit hard, because the answer is it isn’t just Meowth!

At level 28, Meowth evolves into Persian, which means we’ve gone from having one confirmed Gen I Pokémon for Sun & Moon, to too. No I have not forgotten that the Virtual console released Pokémon Red, Blue/Green and Yellow games, are in fact going to be compatible with Sun & Moon meaning every Gen I can make an appearance in the upcoming Pokémon games, but that requires the Pokémon Bank, whereas this Meowth is already in Alola. It also means that Meowth and Persian are going to be a part of the Alola PokéDex, their first actual new dex entry since they were included to Johto’s PokéDex.

Furthermore, before we knew anything regarding these next games, given as how the new location is based on Hawaii, general assumption is there will be a few new Bird Pokémon, but now that we have both Litten and Meowth confirmed for the game, counting them and their evolved forms and Solgaleo, it means we can expect to see 6 Cat Pokémon in this game, which is actually a big deal! Why would it be? Well clearly Alola likes its Cat Pokémon and considering as how we’re already getting 4 new Cat Pokémon, it stands to reason the other cats we see will be from previous Gens. And considering how many Cat Pokémon there are, there are quite a few who could make an appearance, but this is the list of the ones I believe will make it in as part of the Alola dex:

I would be the first to admit I’d rather see the likes of Shinx and his evolved forms make it in and who knows? Maybe they will, but I find it doubtful due to their colouring and similarity to Litten. It is also because of the similarity reason that I doubt Litleo and Pyroar will be making an Alola dex entry. Not only does Pyroar look like a non-Legendary version of Solgaleo, but even Litleo (Little Lion) doesn’t help matters as you can spell his name out of the first three letters of Litten’s name and the last three of Solgaleo’s. Granted this paragraph is circumstantial, but the fact remains Meowth’s presence confirms two Gen I Pokémon, and given Nintendo’s habit of hiding little clues wherever they can when it comes to Pokémon, Meowth’s inclusion of the footage good very easily be Nintendo’s way of hinting that kitty cats do play a larger role than we originally thought, especially since in the real world, Hawaii is overpopulated with cats and have a lot of issue with feral felines. A fact which could act as another indicator that there will be an overwhelming population of Cat Pokémon in Sun & Moon as well.  This speculative theory aside though, Meowth’s presence does matter and is just a big a deal as the new Pokémon we know absolutely nothing about.