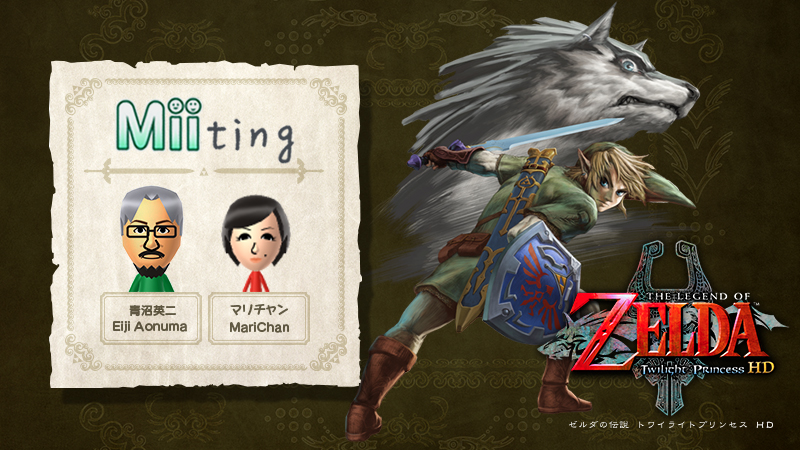 Lately I was just thinking to myself that it has been quite some time since the last Miiting, but if you like me, were of the same mind, no longer must we feel the need to fret as another Miiting has taken place and this time Eiji Aonuma is talking all about Twilight Princess HD!

It doesn’t matter that the original game came out 10 years ago, or the fact the remaster came out over a month ago, it’s great to see the iconic producer behind the Legend of Zelda to take the time to talk about it in such depth. Sure we’d all rather if he spent the time giving us a few details on the upcoming Zelda U, but the reveal of Aonuma’s desire for a Telma amiibo? It’s just too much to pass up.

This is the 6th Miiting since they first came to be and is the 3rd one to revolve around a Zelda game, (Majora’s Mask 3D and Tri Force Heroes being the other two games) and it sees MariChan asking Aonuma the questions a few of us wanted to know the answers to regarding this game. Questions such as how the Wolf Link amiibo came to be. Why Nintendo went with Australian developer Tantalus Media in the first place. Aonuma even goes on say how when they were doing Twilight Princess originally, they wanted this Link to show off more, (the swinging of the sword prior to sheathing it is just one example.) Even better than that is the revelation that Twilight Princess was the first Zelda game and one of Aonuma’s games that Mrs Aonuma played and got to the end of it without even locking on to her enemies.

With so much to read, it is worth paying a visit to the Miiverse and checking out the Miiting in full. You can use the source link to take you straight to it, or spend the time checking out our full Legend of Zelda: Twilight Princess HD review right here. Be sure to let us know in the comments what you think of the Miiting reveals and what you think of the beautiful HD remastered Twilight Princess.