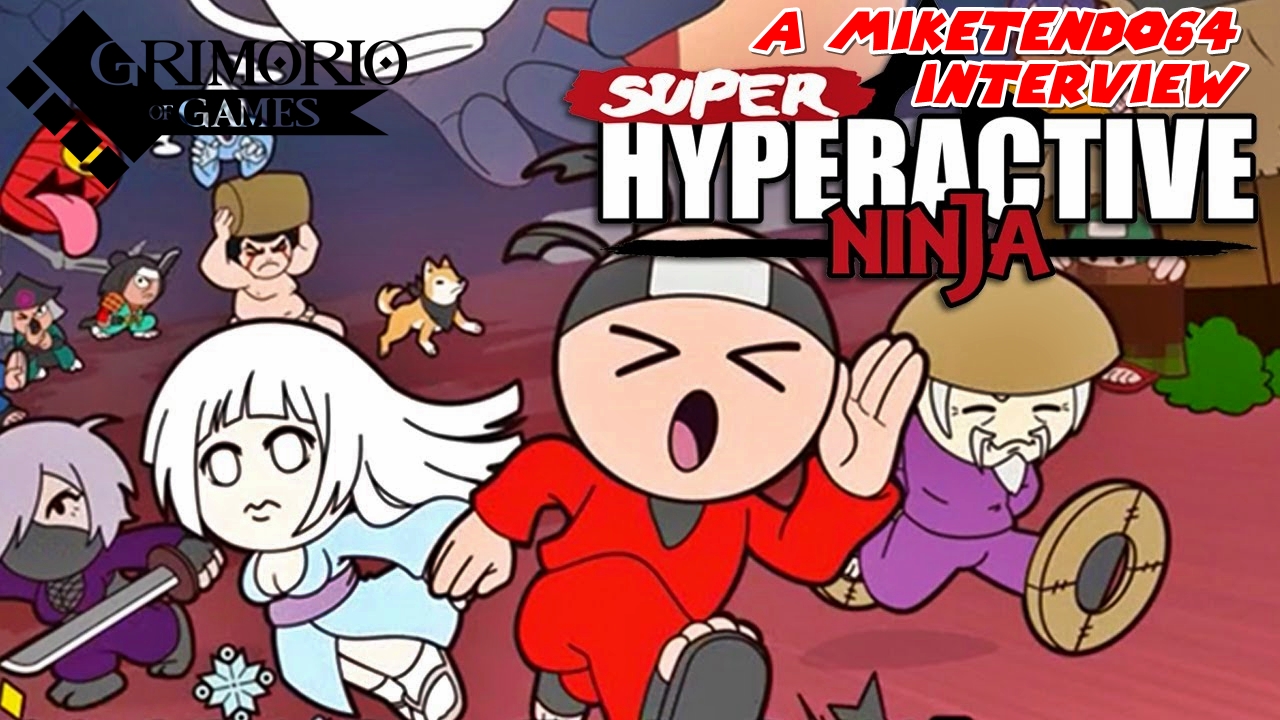 [Interview] Víctor Pedreño: How Super Hyperactive Ninja came to be & Bringing it to the Nintendo Switch

Provided you love games that feature ninjas and coffee and especially love them on a platform like the Nintendo Switch, then you will love Super Hyperactive Ninja. Developed by Grimorio of Games, the title is currently being ported to Switch and keen to know more about it and the Switch release, we took the time to chat to one of the game’s developers and although we’ve already posted our smaller portion of the interview, now it’s time for the main course:

In typical interview fashion, would you be so kind as to introduce yourself to our readers and tell us a bit about yourself, your background and your involvement with Super Hyperactive Ninja?

I’m an avid gamer since I remember, back in the SNES days. I grew with games like Super Mario World, Megaman X and Super Ghouls ‘n Ghosts. I enjoyed how those games offered me a challenge to best my skills (maybe Ghouls ‘n Ghosts was a little too much!) and without a doubt that’s what made me love video games.

Javi, the other 50% of Grimorio, has a very similar background. So things being this way, we started Grimorio with the intention of bringing enjoyable and challenging experiences to passionate gamers like ourselves.

Super Hyperactive Ninja in a Nutshell:

Víctor Pedreño: Super Hyperactive Ninja is a challenging and fast-paced 2D platformer. You control a ninja, which has to reach the goal (or defeat the boss, depending on the level) before running out of energy. To recover energy, you must pick up coffees that recharge your energy bar. Said energy can be used to enter Hyperactive Mode, in which you can run faster, jump higher and perform wall-jumps and “sneak attacks” on enemies, but at the expense of a higher energy consumption and not being able to control direction.

Not being able to change direction directly, you will need to learn how to use the level’s geometry to redirect your character. This gives the game a layer of strategy, so it’s not mindless running. This is a difficult game, which requires you to react fast, be wary of your surroundings and plan accordingly, and may not be for everyone. We are conscious about it, but we think players who want a challenge (and speedrunners) will enjoy it.

The Inspiration behind Super Hyperactive Ninja:

Miketendo64: How did Grimorio of Games come up with the idea of Super Hyperactive Ninja and how does the finished game compared to the one you originally conceived?

Víctor Pedreño: This game is a remake of Hyperactive Ninja, an Android game made by David León (who later founded Lince Works, the makers of Aragami) and me when at University, around 2010. Back then, we were spending a lot of time there between classes and assignments (sometimes more than 12 hours a day!), so we drank a lot of coffee (especially David) to be able to endure it. One day, David came and told me he started learning to program for Android and wanted to make a game.

We started to make the game for Android 1.5, which didn’t even have multi-touch, so we needed to make a game that only had an input. The logical conclusion was to make a “runner” and the input a jump. To make an excuse for the character to be constantly running, we came up with the idea of him being hyperactive for drinking too much coffee, and that you had to get more coffee in order to keep going. That’s how the original Hyperactive Ninja came to be.

The game performed quite well, especially for being our first, but being limited by the controls, we ran out of ideas to make the levels interesting, so we soon started working on a PC version with more complex mechanics, powers and all. However, we had to leave that project aside as work took up all of our time.

Two years ago, I reminded David about our planned Hyperactive Ninja remake. He still wanted to make it but didn’t have enough time, whereas I had plenty. I showed him my idea of the remake, Super Hyperactive Ninja. David liked it and let me do as I pleased with the game, giving advice and helping me to design some things when needed. Then Javi joined me and provided the character design, graphics and animations for the game, which all have this cute paper cut-out style.

As if the final game is different to what we conceived, I can tell that after having made a couple of games before one thing I learnt (and learnt the hard way) was to design clearly before starting work on the game, so the Game Design Document for Super Hyperactive Ninja, is pretty close to what it ended being.

The Benefits of Working with Game Maker Studio:

Miketendo64: You previously mentioned that the Switch port of Super Hyperactive Ninja, is thanks to the Switch export model being supported by Game Maker Studio 2. How are you finding working with Game Maker Studio 2 and are you having to make many compromises to have the game work the way you want it to?

Víctor Pedreño: Game Maker Studio is a good tool if you are a small team. Previously, I have worked with custom engines, and that’s A LOT of work you might not want to spend time on if you want to make a game. Being a team of two, and only one programmer, it was obvious that we couldn’t take the “we’ll do everything” route.

Game Maker provides the environment to handle image rendering, audio, input and file management. You can also “program” your game using the Drag and Drop system, which I personally don’t like and thus didn’t use at all (but I have to admit it can be a good way to make games for people who don’t know or don’t want to learn how to program).

Before starting to work on Super Hyperactive Ninja I spent two weeks learning GML, which is the programming language Game Maker uses. It’s pretty easy to learn, more if you know some C and/or JavaScript. After that, we had a playable prototype in less than a week, with Hyperactive Mode and all. In less than a month we had all the main mechanics made. So Game Maker truly made development faster; WAY faster than if we had to create the whole engine.

Miketendo64: With the Switch having features such touch-screen and HD Rumble, will you attempt to take advantage of them?

Víctor Pedreño: We are studying how to use HD Rumble in an interesting way. We’d also like to use the motion detection to some degree, maybe for an easter egg or something, but we’re busy making it all work as it should on the Switch. As for the touch screen, the game won’t use it for anything.

Víctor Pedreño: We’d love to make a demo for Super Hyperactive Ninja on Switch, but first we want to ensure we can have the full game out on it, as soon as possible. If we can’t release a demo at the same time or before the game’s release, we’ll do it afterwards, but we’ll try to have a demo out in the eShop as soon as we can.

More to come from Grimorio of Games:

Miketendo64: After the release of Super Hyperactive Ninja on Switch, what comes next for Grimorio of Games? Will you work on a sequel or something else?

We are now working on two prototypes, one of which we wanted to have ready for Gamescom (but we couldn’t). One of those projects is a pretty ambitious one, and will probably be left for later, the other is more feasible and will probably be our next project. We’ll try to have something to show at the end of the year.

Anyway, if people want a new Super Hyperactive Ninja we have lots of ideas for that (be it 2D or 3D). So if you play and like the game, tell us!

Víctor Pedreño: If you like hard and unforgiving games, give Super Hyperactive Ninja a try! Also, expect to die a lot. This is a game that can be played in more than one way and has lots of little secrets I hope you look forward to finding out.

If you’ve already played it on another platform (or when you do on Switch), tell us what you liked and what you didn’t about the game to take it into account for the (possible) sequel or something.

Lastly, I sincerely hope you like the game. We’ve put a lot of effort and passion into this project and had a really good time making it. I hope this shows when you play the game.

Víctor, we thank you for answering our questions, and wish both you and Javi, all the best with Super Hyperactive Ninja?