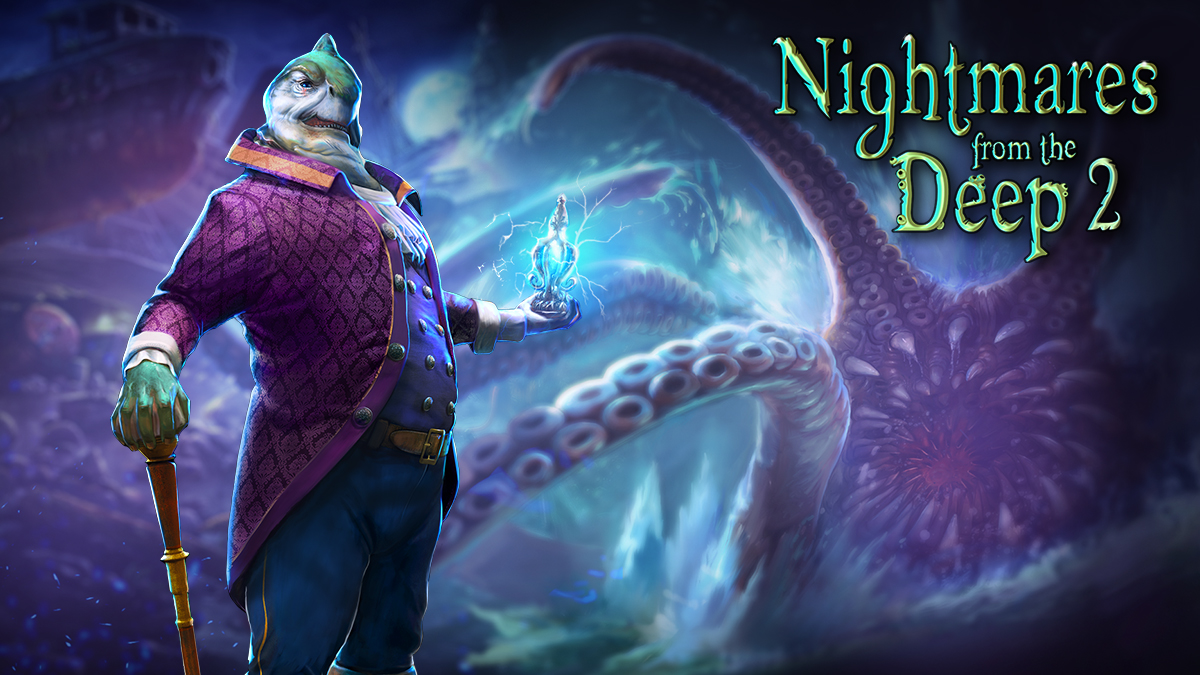 [Review] Nightmares from the Deep 2: The Siren’s Call (Nintendo Switch)

Something fishy is going on and I’m not talking about the fish people!

Provided you are a lover of puzzle games, there’s a good chance you are familiar with Hidden Object Games. If you’re not, HOG (sometimes referred to as Hidden Picture games,) are part of the puzzle genre that sees players having to locate listed items that are hidden within the picture presented on screen.

HOG have been around for quite some time, with some notable examples being Mystery Case Files from Big Fish Games and Dream Chronicles by PlayFirst and now, a new HOG is available on Switch.

Developed by Artifex Mundi (a developer who is no stranger to Hidden Object Games,) Nightmares from the Deep 2: The Siren’s Call is a HOG and it’s a bit of a weird one at that. Not necessarily because it’ story is weird, (although it is partly,) but actually because it’s the second game of a three-part long story and it’s the only Nightmares from the Deep game to be ported.

At the end of the day though, it is another game gamers can play on their Switch, so let’s go over what it has to offer before we write it off for good, shall we? Having first released in 2014, Nightmares from the Deep 2: The Siren’s Call, is the direct sequel to Nightmares from the Deep 2: The Cursed Heart and as such, it carries on the pirate them established in the first game, and features the same protagonist.

Having already succeeded against Davy Jones once already, in Nightmares from the Deep 2: The Siren’s Call, for Sarah Black, the curator of the Caribbean Naval Museum, the nightmare is far from over. What was meant to be just another late night working at the museum, would soon turn into another terrifying ordeal and it starts with a messenger carrying a package that only Sarah can open.

In almost no time at all, Sarah is attacked by fish people, abducted by a fish-person in a yellow raincoat and taken to Kingsmouth, a cursed place that has not been affected by the passage of time in a long time. But, just in case all of that wasn’t bad enough, there is an ancient conflict that only Sarah can put right because if she doesn’t, the locals who call the fishing town call home, will continue to be affected by the curse that turned them into mutated fish-looking humans.

As for who is to blame for the curse, the fault rests with two persons, the first being a black-hearted pirate named Murray, (aka the Mayor of Kingsmouth) and Davy Jones, since it was because of a deal the two made that caused the curse in the first place. But breaking such a powerful curse will not be a simple task, for there is a Kraken to contend with and a Siren whose help you will need, but not before Sarah helps her first.

But the best improvements, have to be the puzzles themselves. There’s more variety, some will take a bit more time to figure out and the mini-games present are enjoyable as well. Should you find yourself getting stumped though, there are hints available and they can be triggered by pressing the Up button on the D-pad.

There is an infinite amount of times you can use hints, but once you use a hint, it must recharge before you can use it again and, depending on what difficulty mode you choose to play, the longer it takes. (Compared to Casual mode, Expert has a longer cooldown and has no indications on the map, meaning the map will not tell you where you are and where you should go next in terms of your next action.)

Regardless of what difficulty mode you play, from start to finish, including the bonus chapter “The Book of Davy Jones,” which requires you to beat the main game first, in order to access, should only take you anywhere between 3 and 5 hours. However, just because you can beat the game as quickly as that, with 44 collectibles present that are well hidden, should you fail to get them all in a single play through, you will have to playthrough the entire game from the beginning, which isn’t a bad thing if you find yourself being engrossed in the game’s story and are delighted to experience it all again.

Although Nightmares from the Deep 2: The Siren’s Call does come across as feeling more like a point-and-click game than the Hidden Object Game it actually is, it still does a good job of representing both genres, whilst being a superior instalment that built upon the things its prequel got right and wrong. It’s just a shame the full trilogy isn’t available on Switch, since it feels a tad weird to jump right into the middle of a series, but at least it does hold up on its own merit and can be enjoyed without playing the first game.