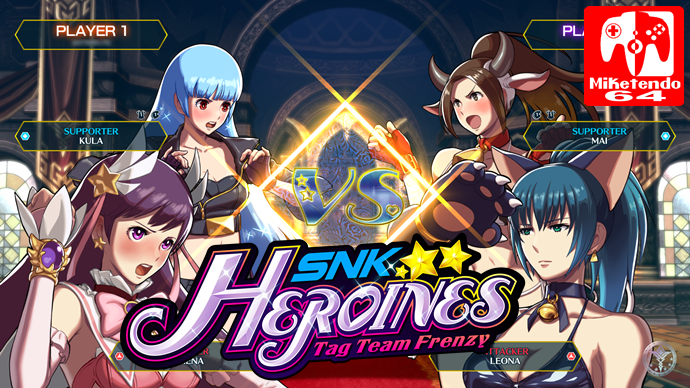 Wow Dood! SNK Heroines Tag Team Frenzy is coming to the Nintendo Switch some time this year. The News was first announced during the Nintendo Direct Mini but straight after, our friends over at NIS America have sent us the full press release which we have for you below!

Santa Ana, CA (January 11, 2018) – In partnership with SNK Corporation, NIS America is happy to announce that SNK HEROINES Tag Team Frenzy will be coming globally to Nintendo Switch™ and PlayStation®4 in 2018!

The Nintendo Switch™ version will be available physically and digitally. The PS4 retail version can only be purchased as a limited edition on the official SNK Online Store powered by NISA (which is currently under development) and will also be available digitally.

“NIS America is honored to work alongside SNK Corporation in spreading the SNK brand of gaming throughout NA and EU regions,” says Takuro Yamashita, President of NIS America. “Since 2003, NIS America has strived to spread Japanese culture through video games and we hope that our partnership with SNK will strengthen our bonds and ultimately, provide the highest quality title for fans.”

SNK Company President & CEO Koichi Toyama stated, “I am very pleased to launch this partnership with NIS America, who has a proven record of delivering excellent results in the publishing and markeDng of Japanese game content over the years. I am convinced that this collaboration will allow us to deliver the highest quality content to our fans.“

About the Game:
Play online or with friends as SNK’s iconic heroines in the brand-new 2 vs 2 fighinng game, SNK HEROINES Tag Team Frenzy! Activate Special Moves with a single bucon, and make use of special items to change the tide of battle! However, the fight isn’t over the moment you’ve chipped enough health away. Once your opponent is on the ropes, utilize your Dream Finish technique to win the match! Spectate on other bacles online, and wage on who you think will win using in-game points. Use your winnings to buy voice clips and accessories in an all-new costume system, and customize your favorite heroine to your heart’s content!

Key Features:
Assemble Your Heroines and BaXle Head-to-Head – A brand new tag bacle acDon fighting game is here! Players can participate in a four-mulDplayer frenzy online or with friends! An Iconic Cast of SNK’s Female Characters! – Choose from a generous roster of female heroines from the SNK universe! Defeat Foes With Style and Elegance – Coordination is key, as players can choose from up to 100 different accessories for their characters. Accessories including cat ears, glasses, face paint, and new sound effects.