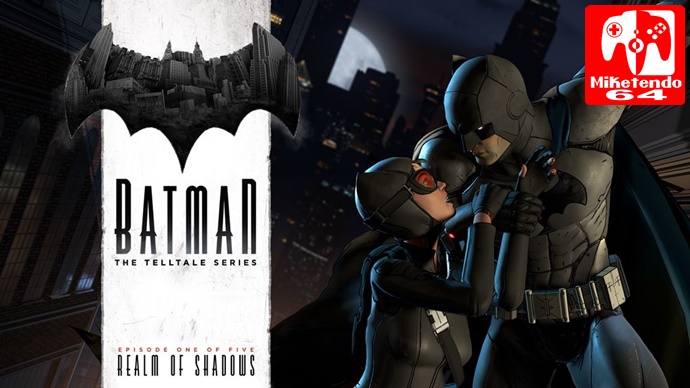 The story of Batman is one that almost everyone on the planet knows in one way or another. The Caped Crusader that protects the City of Gotham from the corruption that is consuming it by apprehending criminals in the act of doing something dastardly. Well Telltale have reimagined the Story of Batman and look into the deaths of Bruce Wayne’s parents and that it may not have been a simple robbery gone wrong that everyone originally thought and that perhaps that there was a darker purpose that will make both the player and Bruce Wayne question his motives and principles as you discover the truth of Thomas and Martha Wayne’s murder and just who exactly were they?

Telltale Games are a game development company with a difference, their works are designed to be more like interactive movies and TV series as opposed to the standard platformers, shooters, racers, and action games we are more familiar with. The give a unique spin on popular franchises like Minecraft, Marvel’s Guardians of the Galaxy, Game of Thrones, The Walking Dead and now Batman. These games are told through a point and click cinematic adventure with button specific sequences. You also have to make decisions and answer questions which all drive the flow of the game and can result in different endings and scenarios. It is normally a style which was hit and miss during the 90’s and early 2000’s but the flow of the game is a lot more fluid which helps engross the player more.

BATMAN – The Telltale Series (Season One) is a 5-part episodic adventure that plays like an interactive animated series. After foiling a robbery at City Hall, Batman is left a little scarred after a scuffle with a certain feline felon, Catwoman. After attending to his injuries, Bruce Wayne has to mingle with toity guests as he has lent his home to District Attorney Harvey Dent as part of his Mayor Electorate campaign. An uninvited guest turns up at the event wanting to talk to Bruce Wayne and is none other than known Mob Boss Carmine Falcone. Falcone wants Bruce to cement their relations together and it is up to you whether to accept or not.

The next day, at a press event where Bruce and Harvey are announcing the construction of the Thomas & Martha Wayne Memorial Hospital, a reporter questions Bruce Wayne about a rumour that Thomas Wayne was less than an honourable businessman and had ties with the Mafia. Though this is only a rumour based on hearsay, it eventually causes a media uproar which puts Bruce Wayne in a difficult position and begins to question everything including the integrity of his own father. Through his pursuit of the truth, Batman will discover things about his family’s past and will have run-ins with his friend turned foe, Oswald Cobblepot AKA the Penguin and having to deal with Harvey Dent as he succumbs to his split-personality Two-Face.

The Comic book art is visually appealing that it feels like the comic is coming to life before your eyes. The music and sound effects really do add a sense of depth and that you sometimes forget that it is actually a game and not a TV show you are watching. Fortunately, there are button specific prompts every now and again to help you remember and that they usually come during intense scenes like fight sequences. If you want Batman to kick some hide, you best be quick to respond when prompted otherwise it is Batman that gets the butt whooping. If you do fail to input correctly you will have to restart the sequence again. The voice acting is pretty good as well and being the interactive story that it is, you do get some say in how you would like the Caped Crusader to respond though this is normally out of a choice of 4 questions that some of the responses will affect how the rest of the story plays out, kind of like the Mass Effect Series but without the choice of love interests or intimate “romance” scenes. (Okay maybe there are a couple of scenes, but they aren’t as diverse as they are in Mass Effect).

As you can probably guess, there is very little in the way of gameplay controls as it normally involves answering a series of questions, or inputting a series of button commands during the Quick-time events. There are some scenes where you get limited “Free Reign” as you explore certain locations looking for clues during your investigations. This is normally done with the left joystick controlling the character and the right joystick to move the cursor. Other than that, it is a “Watch what happens” as your responses and inputs will have varying consequences on what happens next or even later as key moments in the game will be remembered by the supporting characters and a small mistake on your part may trip you up later in the game.

As the game is based on tailoring your own story of Batman. You also get the initial option to customize your Bat-technology colour display between Blue, Red, Green & Purple. This may seem silly but when you are popping by the Bat-computer from time to time or using your gadgets during investigations, you may suddenly realise that your choice of colour display may have been an erroneous one as there doesn’t seem to be a way to change it back. There seems to be quite some play time in each episode as can last over an hour or so and with 5 episodes in total, you can get about 9 hours of play time in a standard run.

I have never really been one for point and click adventures, but any game with Batman has got to be worth a play and I am glad I did as it is a gripping tale that gives you a different perspective of Bruce Wayne as he has to deal with the what turns out to be a not so honest upbringing that the very foundation of Wayne enterprises was built on the very thing what Batman has created a legacy against, crime and corruption. The action sequences are entertaining and trying to piece together crime scenes add challenge without being too difficult. It is definitely an interesting game to enjoy when you prefer a change of pace from playing Super Mario Odyssey, The Legend Of Zelda: Breath Of The wild or DOOM.