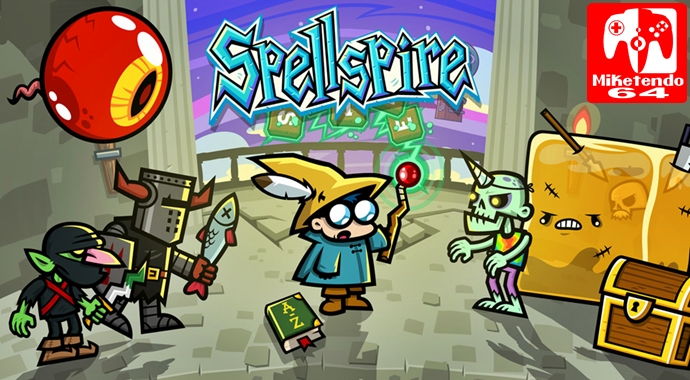 Does your lust for wordiness know no satiety? Are you a scrabble maestro? Or have you won multiple episodes of Countdown in a row? If your answer to any of these is yes, then Spellspire is definitely for you. You’ll be fighting not only with your impressive vocabulary, but also your quick wits. Let those magic fingers do their stuff and take on the 100 floors of doom that stand before you.

Spellspire saw release on mobile phones a while back and has just come out on every console. The Switch and PlayStation Vita editions will be the best of the lot thanks to touchscreen controls, but you can play the Switch version on the big screen if you really want to. Take it from me; you will want to play the game in handheld mode, as the touchscreen controls are a lot easier and quicker to use. The premise is simple enough. You play as a wizard, who unleashes spells by, um, spelling words.

At the start of each level, you are given a random selection of ten letters near the bottom of the screen. Using these letters, and only these letters, you are tasked with finding as many words as you can that are at least three letters long – the longer the word you type, the more powerful your attack. You’ll be surprised by just how many words you can make out of a seemingly random selection of ten letters, but you’ll need to be quick about it.

Every enemy will attack you, so to stop all the goblins, skeletons and evil knights in their tracks you must type as fast as you can. Each enemy comes with their own health bars, attack strength and attack timers. Some will attack you after just four seconds, so you need to spot words, type them and then cast them at pace. Trust me; you will be thinking of new words to use as you go to bed – there’s great satisfaction in finding a seven or more letter word. Typing the words is as easy as tapping the correct letters, then to cast them you have to press the little sword image just next to your typed word. When played with more traditional controls, however, you use your d-pad or analogue stick to move your cursor over the letters, press “A” to choose them and then press the right trigger to cast them. It’s easy enough to beat the earlier stages with traditional controls, but you will need the speed of touchscreen input to beat the game’s plentiful difficult levels.

Indeed, Spellspire is not an easy game. It took me over twelve hours to get through the game thanks to the endless amount of grinding you have to do thanks to the ridiculous difficulty spikes scattered across the game. You’ll breeze through a few stages, but then, bam. You’ll hit a wall. These are more often than the overly difficult boss battles that appear every ten levels. As with the bosses, you will come across a new enemy every now and then that will knock you back for six. You see, Spellspire is as much an RPG as it is a puzzle game. You level up and unlock new equipment via coins you win from beating enemies and clearing floors (replaying stages will award you with extra funds and a star if you beat them with full health remaining). You will come across enemies with loads of health, attacks that kill you in one hit and they all have elements they are weak against. The spikes are ridiculous and not entirely unlike those seen in The Elder Scrolls IV: Oblivion.

You spend far too much time replaying stages to unlock vastly expensive new weapons and armour, all of which coming with a lot of pricey stat boosts to buy as well. It’s frustrating design. It’s a good thing that the simple gameplay is addictive and good fun, otherwise Spellspire would just be a difficult mess. I understand that the developers wanted there to be a challenge to the game, but if the prices for upgrading your equipment or for new equipment was that bit lower it would all be distinctly more palatable and enjoyable. There are ways to make levels easier for yourself in order to build up your cash reserves however.

Downed enemies drop helpful items as you go (there’s some armour that increases drop rates) including the likes of health potions, missiles and books that award you the use of a long word in order to dole out a lot of pain. If you learn the weaknesses of your adversaries, you’ll have a much easier time and there is a list on the shop screen that handily reminds you of enemy stats. Before the start of each stage, you are shown a list of the enemies that you will face. If most of them are weak to poison, equip a poison wand, if they’re weak to fire, equip a fire wand… you get the idea. It’s also key to know when to play the correct words. Learn what enemies will be downed by a shot of “Cat” and what ones need a big old “Stoners” to knock them out. If you’re quick enough with your typing, you will stop your plucky wizard from haplessly walking towards the enemy and chain endless shots of magic. You will find yourself going through plurals of words a lot using this method.

Don’t be afraid to try any and every word you can think of here, either. I was surprised to see that “Lol” counts and so too does “Phat”. So who knows what kind of crazy words will count. Typing out whatever words I could find never got boring and it was nice to think when playing a game. I don’t think I’ll be winning an episode of Countdown any time soon, but I do think playing the game has increased my wordiness to some extent, or at the very least, has advanced my ability to think quickly. All told, Spellspire is a solid puzzle game built around a quality gameplay hook that will entertain for a good while, just expect some frustrations along the way.

Spellspire is a good game ruined by plenty of dodgy difficulty spikes scattered throughout the game. You’ll have fun finding words, typing them and using your own quick wits and intelligence to best your adversaries, but you won’t enjoy the obscene spikes in difficulty or the high prices of new equipment that forces you to grind for hours. For £8.99 though, you won’t find many better puzzle games, despite being able to play a version geared towards micro-transactions on your phone.