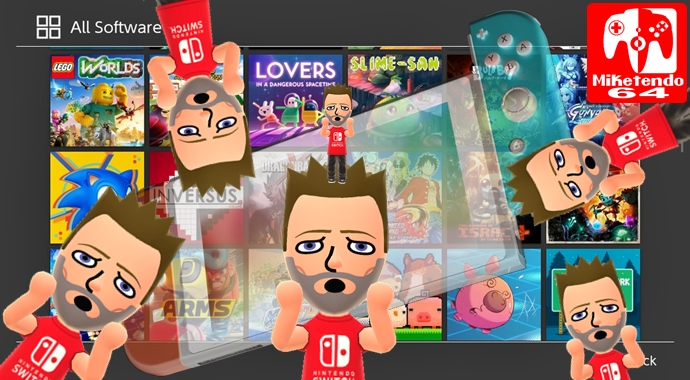 Hey guys, don’t mind me, this is “Miketendo64’s Manical Overlord” Jack Longman, aka Jacktendo92 and today I’ve cooked up a little something just for you!

In case you missed it, this October Miketendo64 surpassed 100 reviews for Nintendo Switch games and we couldn’t be prouder with that as very few sites have done the same, but trust me these last few months have not been easy. In fact since the Switch released, things have becoming exceedingly difficult with every month that passes as now there is even more competition for us to deal with.

The Nintendo Switch is a big deal and the world knows it, so new Nintendo Switch related websites, Twitter accounts and YouTube channels are constantly popping up and because we’re not one of the “big ones” just yet like My Nintendo News and Nintendo Life, which are both awesome and “Lovely,” it means while we may be a big fish in the pond of where we are, this year this fish has moved from its pond into the Switch Ocean and while we’re not as small as the local fauna, we’re not quite a Blue Whale just yet (at best, we’re a Whale Shark and a young one at that.) So with so much competition, it compels us to do better, to post more news, to post more original features and to be original, but we also needed to get a gimmick.

Having been in charge of choosing what that gimmick should be, I in a moment of possible madness, decided we should try to be the Nintendo site that has penned the most reviews and believe or not, but we have written more Switch reviews than Switch Player, Nintendo Life and Nintendo World Report. Now if it comes across looking like I’m bragging, I’m not as I’m not a vain person, but in mere months, we have attained something great and while we may not hold our position as strong as we’re holding it now, as it may slip from us, the fact is we have done something great and we are all so proud of that.

Still pride doesn’t get reviews and posted to the website, for starters it doesn’t have fingers to type words on a keyboard and a mind to think, so because pride can’t type and we wanted to be a leading Nintendo Switch review site, it means it was time to rely on reviewers. Unfortunately because of the release of Zelda and a couple of indie games that got off to an impressive start upon the Switch’s release in March, the console became gamers best friend and deprived us of our best reviewers for a while. So with a Miketendo64 history in writing features and reviews before I wound up as being the Editor-in-chief, I took it upon myself to handle the majority of reviews and in the 7 and a bit months that have past, I have written 84 reviews for Nintendo Switch games myself, with 40 of those reviews being written since the start of August.

As someone who lives a triple lifestyle, as I do construction in the day, video game journalism in the afternoon and writing related stuff like writing books, promoting the books I have written in the long hours of the night as I only get about 2-4 hours of sleep a day, my time is limited. I do have something of a social life and do cool things like go scuba diving with the occasional ray and help out with turtle releases, but again I have limited time, and while getting 40 free games may sound great over an 80 day period, it’s not when you consider the way I do reviews. Each game needs at least 5-8 hours of solid gameplay before a review can even be penned and that’s just the small ones, as the bigger ones require a lot more time like Fire Emblem Warriors, which I’ve invested 20 into. There’s also the amount of time reviews themselves actually take to write as sometimes they too can be a bugger, with some taking up to 3 hours. Then before you can even write the review, because not everyone knows about every game ever made ever, sometimes if you really want to write a good review, you need to research the history of the game first. I’m talking soundtrack, development, inspiration and whatever else you can find because all of that is what a video game review really is.

Writing a review is not just playing free games, it is a lot of hard work and needs to be treated as such. It’s something some people actually do for a living and the bigger you are, the more views your reviews are going to get, so you owe it to yourself and the game’s developer/publisher to write the best review you can possibly write, regardless of how good or terrible the game you are reviewing, is. All games, even the absolute worst, should be treated the same way, but while all of this was easily manageable in the past, reviewing for Switch now is a total nightmare. For gamers wanting to play a game, they can either just buy the game and get stuck in, or check out a review first and then decide. Well once upon a time way before Switch reviewers had plenty of time to play a game and get their review out as codes for games on Nintendo platforms could arrive a week or two early, but for Switch that is not the case.

Code distribution is so bad that sometimes you won’t even get a code for a game until the day it releases, or you do get it early, but it refuses to work until release day. Sometimes Miketendo64 has gotten codes for games a week after the game has released, but thankfully we do get the rare occasion where we can get the code a week in advance, but because we are so up to our eyeballs with games to review (we’re currently at 16,) before you know it, the game you just received is our in the public eye and your review for it, is not quite finished yet. Granted in that case if a review is late, it’s down to you, but when you only get a code the day before a game releases, you can’t be blamed for your late review because then and there you have a decision to make, do you pen a crappy and hasty review that only covers the surface of the game or do you wait it out, take your time and actually write a review?

Well for the Miketendo64 team, we live by the latter and yes, lately a few of our reviews have been late and we apologise for that, but we’re trying to make a lot of changes to accommodate for this. We’ve taken on more reviewers and while some are off to a good start already due to already having experience, but some of our new applicants have no experience whatsoever and we’re taking the time to train them and bring them up to speed. Yet, despite the fact we are making some serious advancements and penning more reviews than ever before, whilst still drowning in reviews, there are plenty of games we have yet to review, like Implosion.

The reason for that is not because we don’t want to review it, but because we are so full on that everyone is run off their feet and there’s no time to review games like that. The only games we can review right now are the ones that publishers and developers are sending to us, so while it may look a tad like favouritism at times like when we post a review on Dragon Ball Xenoverse 2 as opposed to Deemo, it’s purely because we never got Deemo but we got Dragon Ball, it came in at the right time and there was plenty of time to produce a review on it. We do try to get hold of the games we haven’t reviewed like Boost Beast, Double Dragon, Deemo and Implosion, but if all the codes are gone or our emails go unanswered, than we’ve got to focus on the games we have got. It’s not we go off the game and their developer, as a few of us actually do buy the games we fail to get, but we just don’t review them as we’re too busy with everything else. We wish we could review them all, but we just don’t have the time or the staff and as much as I would like to succeed in my personal mission of writing 100 reviews for games on Nintendo Switch and am very close, I can’t keep working myself to the bone like I have done in recent months. So while I’m not going to be stepping down from reviews any time soon, I am however going to invest more time into the games I play to produce even better reviews, because in this case what’s better for me, the guy who produces at least 85% of the site’s content, handles giveaways and emails, is better for Miketendo64.

But yes, reviews are not the simple affair some believe them to be. They can be a right nightmare and sometimes can actually make you not enjoy a game everyone else does, purely because you have to look at it like a reviewer and not a gamer, but hard or not, Miketendo64 does not turn and run because a challenge is proving too much. Miketendo64 plants its feet firmly on the ground and embraces it and will continue to do so because now that we’ve reached 100 reviews for Nintendo Switch, it’s time to see if we can make it to 200! (Wish us luck, we’re going to need it!)

Holy baloney Batman, this got a lot a longer than originally conceived. Never mind, it’s the truth and I’m not going to shorten it, but to all those who stuck around to read the whole thing, Thank you, it means a lot to all of us and we hope you look forwards to the many reviews we have lined up for you. You have seen nothing yet!