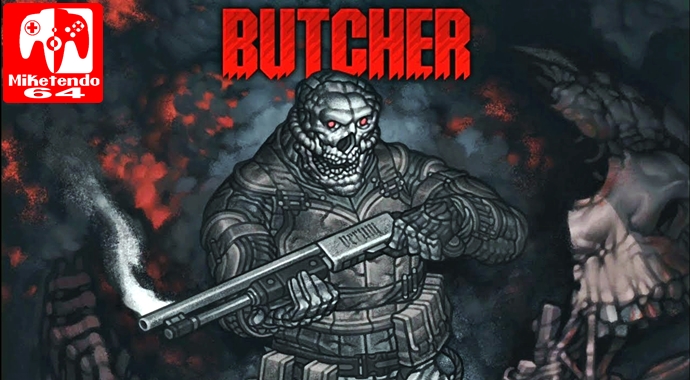 Have you played Doom? Then you’ve played Butcher. Good night everybody!

Just kidding of course, but to say that Butcher wears its slavish devotion to id Software’s 90’s shooters on its sleeve is putting it mildly. From the ever-present HUD face that looks shiftily from left to right to the level transitions that show the screen melting away, it’s clear that the developers were big fans of those ultraviolent FPS icons and wanted to pay tribute to them in the form of a 2D run ‘n gun gorefest. The question is, did they manage to live up to such lofty aspirations?

The first thing you’ll notice is the outstanding presentation, as never before has a game this gritty and brown been this aesthetically pleasing to look at. The orange-tinted glow of the lava-soaked Ironworks Factory, the treacherous pirhana-infested waters of the Jungle Outpost, the spiderlike sawblade mechs lurking in the Old Military Base – the environmental design absolutely excels in all its pixel-y glory, and it only gets more impressive once you’ve painted the walls red with the blood and entrails of all who oppose you. The sound design has just as much attention to detail, making sure every scream, crunch and shotgun blast feels positively palpable alongside the grungy atmospheric soundtrack (though none of the music quite reaches the heights of something like E1M1). Unfortunately, this dedication to the visuals and audio seems to have come at the expense of the actual gameplay. Everything onscreen is incredibly tiny, and between the pickups, the enemies spawning out of thin air, the hundreds of bullets flying everywhere, the distracting graphical effects, the destructible background objects, and the myriad of traps, it’s easy to find you’ve lost half your health without even knowing what hit you. It’s not something that’s fixed by getting a closer look at things in handheld mode either, as that presents its own issues. Being a twin-stick shooter you’ll need your thumbs on both sticks at all times, and if you’ve ever tried to play a game like Splatoon 2 in handheld mode you’ll know that the stick layout is nowhere near as comfortable and easy to use as when playing docked with a Pro Controller or with the Joy-Con in a grip. So basically, you can have clearer visuals or better controls, but you can’t have both.

Speaking of controls, the developers seem to have designed them for maximum playability by confining them to the sticks and triggers. The left and right sticks let you move and aim, ZL jumps, ZR shoots, R performs a melee attack, and the A button is used to occasionally hit a switch. However, there’s one odd man out here… the X button switches weapons while the L button goes completely unused! This means you’re forced to stop aiming every time you want to switch weapons, which can mean death in a game as brutal as this. The only reason I can puzzle out as to why they would have done this is the fact that pressing L + R at the same time serves as an quick self-destruct button should you want to restart the level (and thus mapping L to switch weapons might lead to some unintentional deaths), but I can’t imagine why any player would want killing themselves to be an easier to perform function than switching weapons.

Alas, this isn’t where Butcher’s issues end. Despite only being a few hours long in an initial playthrough, the game fails to make the most of its short runtime. You’ll encounter the same couple of enemy types throughout the entire game and as a result the combat never really evolves beyond locking on to an enemy and pressing the trigger. Further compounding this problem is the game’s reliance on boring “extermination” segments. These attempt to add some variety by locking you into a single arena to take on a horde of enemies, but since the shooting isn’t particularly riveting in the first place, these sections just come off as tedious and repetitive. Even the final (and only) boss is dispatched by utilizing the same circle strafing tactics you would with any other enemy. As for secondary goals, secret skulls serve as the only collectible in the game – similar to the skulls in Halo, these can be found by doing obtuse/obscure things like pushing up against walls, abusing buzzsaw physics, or backtracking to the start of a level. Unlike Halo, they don’t seem to unlock anything special besides slightly altering the title screen, so finding them just ends up feeling like a waste of time.

Another off-putting aspect of Butcher is its contradictory attempt to poke fun at gamers of lesser skill. The title screen boasts that “The easiest mode is Hard!”, yet a quick check of the difficulty selection screen reveals a prominent Casual mode that requires so little skill even your grandmother could get in a few headshots during commercial breaks of The Price is Right. Similarly, pressing start will cause the game to boldly state that “real men don’t pause” as it allows you to do just that. Even Home Improvement for SNES had the cojones to leave its instruction manual empty, Butcher. You’re either an ultra hardcore game that makes no concessions to casuals or you’re not. Lastly, this seems to be a somewhat shoddy Switch port. In my playthrough the game crashed on me 3 times, and most bizarrely of all, a tiny white line appears in the bottom corner of the screen while the game is being played, giving the illusion of some dead pixels.

Though its gameplay feels uninspired and repetitive, you might find something to enjoy in Butcher if you love run ’n gun 2D shooters and gore  – but between the uncomfortable handheld controls and numerous crashes, there’s no reason to buy this on Switch if you own a PC or any other console.