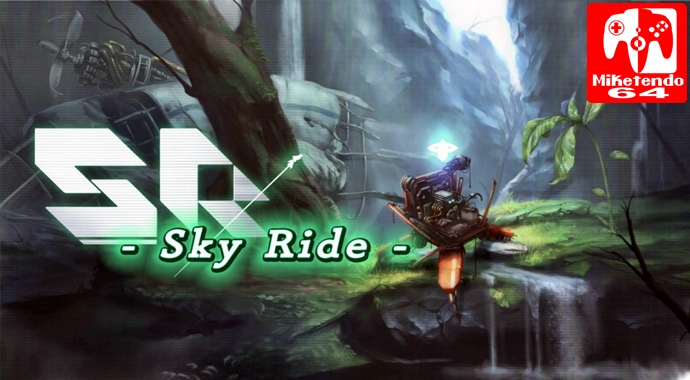 Fun fact: I played Sky Ride and prepared the review on an airplane. I guess you could call my experience a true… sky ride. Here’s another fun fact: sitting quietly on the airplane was more entertaining than any moment I spent playing this game.

In Sky Ride, you play as a young woman on a flying motorbike and shoot flying lanterns…for some reason. The game doesn’t explain anything to you beyond a single loading screen picturing said woman and bike. I did some research and actually found a six sentence synopsis on the game’s official website. But I’ll spare you the details since the game itself makes no effort whatsoever to share its own story.

Back to the gameplay: you fly around and fire at hundreds of these flying lanterns. Your main weapon is a built-in machine gun on your bike that automatically shoots in front of you. You can also use missiles, lasers, and bombs. These secondary weapons lay more waste and produce nice explosions, but the limited ammunition takes time to reload, unlike the machine gun with its infinite ammo. Shooting large quantities of enemies has its moments, and it’s definitely unique to fly a motorbike around. Although it sounds like a decent arcade game in theory, this sky ride isn’t as pleasant as it seems.

First off, the controls are a mess. Your motorbike and on-screen aiming reticule are independent of each other. You move forward, backward, and sideways with the left stick, which is self-explanatory. However, the camera, controlled by the right stick, follows the on-screen reticule as opposed to where the motorbike is facing. Half the time, I was navigating my motorbike without any clue where it was going. Not that it mattered, since the awkward camera angle makes it near impossible to tell what’s around you anyway. What’s even worse is that moving the reticule up and down actually makes you ascend and descend, leading to a disconnect between motorbike movement and aiming. Protip: there is an option to hold the left stick down to aim up and down without moving, but it’s still difficult to achieve consistently, not to mention the game doesn’t explain this anywhere. I think this game was trying to achieve a style similar to that of Sin and Punishment and Star Fox, but without on-rails gameplay, the whole experience falls flat.

The controls take getting used to, but it might not even matter once you confront the erratic enemy AI. I still have no clue what pattern the lanterns travel. The smaller lanterns are easy to deal with, but later on, larger lanterns appear that completely swarm you. Then, robots begin to annihilate you with homing missiles and lasers. Again, remember that simply navigating your vehicle is difficult enough. It’s frustrating to get bombarded and have no idea what just happened. While defeating enemies does yield health refills, it’s far too easy to go from 100% to 0% health in an instant.

And it only gets harder with each progressive level. By the way, I use the term “level” loosely. There is only one level in Sky Ride, a contained flooded area with highways jutting out into nowhere and a few rock formations. You’re in the air most of the time anyway, but it just feels cheap to be confined to this singular uninspired area. And since you face the same enemies and even bosses over and over again in each “level,” this makes for one of the most repetitive experiences I’ve had on the Nintendo Switch thus far.

Once you inevitably die, probably from the completely unruly second boss, you input your high score. Adding to the list of disappointments, there isn’t even an online leaderboard, so have fun playing the same level over and over to beat your own score. Following that, the game resets to…Oh right. Did I mention that Sky Ride doesn’t even have a main menu? Instead, you are greeted with a darkened screen, featuring the name and leaderboards, where you can silently demo the one level (just in case you wanted to perfect it).

It doesn’t help that the game’s textures are extremely jagged, and I can literally see through objects like exploding lanterns or rocks when I’m close enough. Think early GameCube graphics. I thought the upbeat synthesized music was okay, but with only a couple of songs in the entire game, you’ll grow tired of it soon enough.

With only one level, repeated enemies, and a wonky control scheme, Sky Ride plays like a cheap, tedious arcade game. It’s a shame, too, because the high-flying bike shooter premise has promise. Had this included a full storyline with multiple levels and many more enemies, I think I could have enjoyed the experience beyond its glaring control issues. And the controls themselves could have been fixed with either an on-rails scheme or first-person gameplay. As the dull game it is now, Sky Ride is not worth your time.

Thank you for reading! You can check out more of Mr. Panda’s articles at Mr. Panda’s Reviews and Nintendo reviews and videos on his YouTube Channel, Pandas at Play.