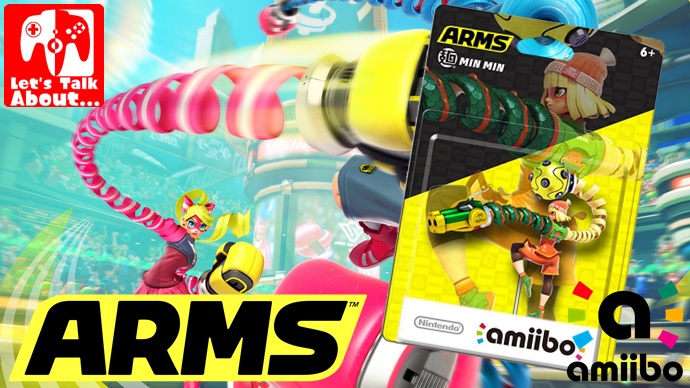 Let’s Talk About… ARMS (And the Lack of amiibo)

But what is Let’s Talk About? Well it’s our feature series that continues to evolve and as part of its evolution, we’ve taken it public, so that instead of just me or Mike Scorpio and I doing all the work, discussing all things Nintendo related, now you too can join in and have your say. So in light of that and eager to strike up yet another instalment, we took to Facebook and invited members of the groups Handheld Gaming Network and Nintendoholics to weigh in on the subject of ARMS and amiibo and this is the responses we got:

So Let’s Talk About ARMS. While amiibo themselves might not be a good fit for it, how do you feel about ARMS amiibo cards that act similar to baseball cards as they have the stats and that of a fighter on them?

Conner Amays: I don’t understand why “figures wouldn’t be a good fit”? Although the baseball card idea is neat, I don’t see why figures sound like a bad option.

Konner Bowen: Figures could be great. If they implemented certain non-game breaking power ups or additional weapons that weren’t overpowered or just cosmetic then people would love them.

DeAnne Williams: I like the figure idea more. I have hundreds of AC amiibo cards and I’m not going down that route again. Trying to trade and sell duplicates is a pain. It’s not as fun like card trading was as a kid when you could trade pokemon cards at school or with your friends. It is too time consuming and schedule conflicting doing that as an adult. Not to mention the cost of it all.

Rebekah Rose Jordan: If I were getting amiibos, it would be figure. Like DeAnne Williams, I have AC amiibo cards, and while they are neat and serve their purpose, I remember trying to trade duplicates and driving an hour out to east Jesus nowhere and no, I’m too old for that garbage.

Trintin Chlok: I think that amiibo could be cool. And if each one came with a few detachable fists. So that way if you got them all you could mix and match. I’d get some.

Angelika Papasodora: I think the amiibo cards would be a great idea for Arms. I personally would like figurines better since I have started on an amiibo collection, but not everyone has the room for them. Collecting the amiibo cards are easier and efficient, and you could even put them in card sleeves and trade them. It would be cool if they did different art for the characters as well.

David Beaudoin: I would buy amiibo so hard. Also, they could easily utilize amiibo. Let you save your ARMS configuration to take with you to your friends’ house!

Anthony Reynolds: I really want amiibos. The cards can kick rocks. Bring me sweet sweet plastic. Also ARMS is an amazing fighting game. I think Splatoon has overshadowed it a bit. But people should really give it a chance. Great game. Online is fun. 2 player local play kicks ass. Characters are sweet. Definitely original.

Brian Irizarry: ARMS amiibo figures with detachable fists that can come in a blind bag would crush my wallet

(In response to Brian Irizarry:) Anthony Reynolds: Do not ever tell this to Nintendo. We’ll all go bankrupt.

Like I said, the discussions were short, but the responses were golden and since a whole lot has been said and I have yet to have the chance to have my say, I think it’s time I weighed in with my own comments.

I have never really been into the whole amiibo phase. Yes I do indeed own some, such as my still-in-the-box Rider Link and Guardian Breath of the Wild themed amiibo, but I’m not an amiibo collector and despite that, I was a bit disappointed amiibo wasn’t announced for ARMS. Granted it’s an entirely new thing and everyone could have hated the fighters so making amiibo could have turned into a huge loss for Nintendo as no one would want to buy figurines of characters they hate, but Nintendo could have least made amiibo cards of them.

They would be cheaper, could have been designed to be like baseball cards with fighter stats and possibly even their bio on one side, but it didn’t happen and it’s a shame. The amiibo could have been used to unlock additional ARMS, or even save your favourite loadout, so when you go round to a friends, when someone else, like your partner, has your Switch, at least by scanning in the amiibo card you can play as your favourite fighter, in your preferred colour, with your favourite ARMS, without having to go through the hassle of choosing everything.

But even if the amiibo cards of ARMS served no function at all, they’d still be worth getting as each one would be special and can easily be packaged up, like Nintendo did with the Animal Crossing cards. Sure they’re a hassle to collect that way, but what amiibo isn’t hard to get? Time and time again the ones we want sell out almost immediately, so why should it be any different with the cards? Also by going with card form, it would be a nice throwback to the time when Nintendo did cards of the Smash fighters when the original 64 game came out. (Those cards were awesome.)

Yes actual figurines of ARMS fighters would be better, especially of the ARMS were all interchangeable, but were that the case, not every fighter might get an amiibo. In fact only 5 might get that privilege, which wouldn’t feel right. This would have to be one of those times where it is all or nothing, as in all fighters get an amiibo figurine or none of them do and while it would be a little too costly and a bit of a financial risk, the risk is considerably less with amiibo cards, so I am disappointed it didn’t happen. But who knows? Maybe we’ll get lucky and when a sequel rolls out, so will a series of amiibo dedicated to it. (A boy can live in hope right?) Until such time though, ARMS not having amiibo is a wasted opportunity and nothing can possibly change that!

This has been another of our revised instalments of Let’s Talk About. Thank you reading. Thank you for supporting the series and if you wish to join in with the conversation, you can do so below by leaving a comment.