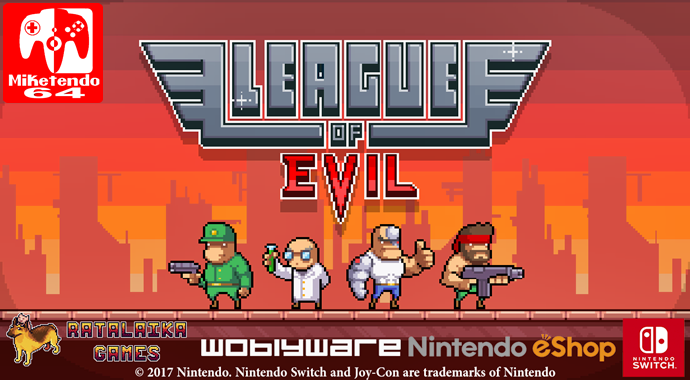 When I first heard the game was getting the Switch treatment, I wasn’t quite sure how to feel about it. Yeah it would be perfect on 3DS, which League of Evil is still coming to, but I knew hardly anything about the game and I never properly played it, but that soon changed. I was shown screenshots, I saw some videos and I was reminded that this new version would feature a level editor feature and for me, it really does make all the difference.

If there is one thing I like in my platformer games, it’s the ability to also make my own levels and plays those made of others. Heck it’s because of this reason I developed a whole major addiction to Super Mario Maker. I loved the hell out of that game and for a long time, I couldn’t get enough of it, and while there was talk and rumours of Super Mario Maker being ported to Nintendo Switch, it has yet to happen. The good news however, is until such a thing does happen (provided it actually does,) at least for now we have League of Evil to fill the void, which in a way, is also the Nintendo Switch’s version of Chicken Wiggle.

I realise that is quite a big statement, but when you strip back the visuals and everything else, until you’re left with just the bare bones that is the concept, the two games are opposite sides of the same coin and a League of Evil really is not that much of a bad game. Content wise, there’s quite a bit going on as the game comes with 140 missions for players to play through as part of the main story, but because it is a game where you can also create, share and play additional levels across many platforms, thanks to the fact that cross-platform sharing is supported, the actual content this game is virtually endless, but before I spend any more time talking about that, it’s only fait I give the main story a proper going over.

The story of League of Evil, is one you can expect of a retro looking platformer. There’s lots of bad guys, there’s a hero and a collectable of sort encounterable somewhere in the level. Except as far as League of Evil is concerned, its hero is a nameless one, as the bionic super agent you get to play as, is never actually referred to by name. Instead he is mostly called Agent by his superiors, and he is tasked with saving the world. I know that’s pretty much the plot to any game involving a spy, as there’s never a game about a spy who needs to save a cat stuck up in a try and must race across 5 towns and 2 countries to do so, but before you rule off League of Evil’s story, there are a lot of evil scientists to beat up? Why? Obviously it’s because they’re all evil, they’ve have decided to band together, labelling themselves as the League of Evil and aim to create weapons of mass destruction. Those nut jobs needs to be taken out by any means necessary, only that doesn’t actually pan out.

For a guy who is explicitly told to stop them by any means necessary, you would think that would mean “take them out by any means necessary” and yet the only thing the agent can actually do to them is punch them or kick them, as he doesn’t use any weapons at all. Granted he is bionic and might not need to use a crowbar, a wrench, or even a flamethrower to put someone down, as obviously his body is a weapon in itself, but it would have been a little fun if the agent could pop a cap in at least one of the scientists. League of Evil has plenty of villains who wield weapons, so the agent could have picked up a gun any time he wanted, but then this is a video game where such a gimmick is not needed as opposed to literally every action movie going where the good guy picks up a weapon from a guy they just killed.

Nevertheless though, while League of Evil may lack interesting ways to kill the evil scientists, and everyone else, it does have variety in lots of different ways, such as various backgrounds and layouts for levels, many different types of bad guys to come up against and kill and even a variety of traps, which can kill you in a single hit. Actually, everything in League of Evil can kill you in one hit. You would think a bionic super agent might be able to take a hit or two, but it turns out he is very allergic to lead, lasers and spikes, as each of those things will KO him immediately.

But then dying isn’t all that big a deal in League of Evil. Sure no one wants to die in a game, but there are no set number of lives and the actual missions, some of them can literally be done in seconds! So even if you kick the bucket, and forced to restart the mission from the very beginning, even the largest of levels in this game, are short and sweet, so provided you don’t have an issue with the controls like some have reported, it’s just a case of figuring out when to make your move and execute the correct approach so that you can take out the scientist waiting at the end of the level. (Taking out the scientist is essential, as doing so is how you complete the mission and the faster you do it, the more stars you can earn with 3 being the best score.)

For those of you who are perfectionist however, as well as bad guys, traps and scientists, there is also a briefcase hidden on every level and while they serve no real purpose other than letting you complete specific suitcase achievements, everyone knows a good spy can not only take out the bad guy, but take out the bad guy, and get the girl and while there might not be a girl here, as the girl is a briefcase, it is possible to achieve both (getting the briefcase and taking out the scientist,) and still get 3 stars, provided you can move fast enough.

With regards to the progression of the main campaign, League of Evil does do a rather good job of adhering to the very same philosophy of “Kishotenketsu” that Nintendo like to follow with their own platformer works. But just in case the meaning is lost on you, to say it more simply, League of Evil is one of those games that keeps things lively by adding new elements to keep you on your toes, in a speedy fashion. So while the double jump can be your friend one minute, the next, the only move you can rely on is wall jumps and speedy reactions.

To say things in the main campaign get hard, would be an understatement as the later levels can be a right devil if you’re aiming to get 3 stars on every level and the briefcase, which you can do in two playthroughs, but while the main campaign is a big part of the game, the Level Editor function is what makes League of Evil a winner for me. Not only can this game that when both docked and undocked, always runs at 60 FPS and 720p, be played with physical buttons thanks to its Pro Controller and Joy-Con Controller support, but it also supports touch-screen controls and when designing a level of your own making, touch-screen controls is the best way to do it.

Also, for a game where you can create levels, the menu and layout is simple and easy enough to use, with the actual uploading and saving of levels being even easier and if making your own levels isn’t to your liking, you can actually download packs of free pre-made levels that are available even to reviewers (bear in mind this review was written and published before the game releases,) and to everyone who buys the game, as well as levels that have actually been made by some of those who got a review copy. (Those who created and uploaded levels anywhere.)

New missions can also be searched and while there isn’t a browser in place like the Super Mario Maker Bookmark website, there is actually one in the way, which should be out and available in a week or two, which will make searching for specific levels even easier. As for where to go, to play the levels you downloaded, you can find them by choosing the start option when on the title screen and instead of picking Chapter 1 and Chapter 2 (story mode’s 140 levels are divided into 4 chapters,) you can scroll the page twice to see two new options. Custom, which is the levels you made and Download, which are the missions you downloaded and whole the ones I have played, have been mostly easy, there are some levels that are incredibly difficult.

But the very thing I like most about League of Evil, is the fact that there is no wrong way to play it and there is no way wrong way to create your levels. It is a game that can be played however you see fit, whenever you see fit, anywhere you see fit and while it’s retro look may be a little too played out for some fans, and feature controls that aren’t up to the standard that they should be for a platformer game, the fact of the matter is, League of Evil, is actually a pretty good port and does well nicely on Switch.

Sometimes the best way to go into a game, is to know nothing about it and have no expectations, because this way, the game can either be something you could have done without, or could be something that knocks your socks off. Possible controls aside, League of Evil is by far the most immersive and striking game Ratalaika Games has brought to a Nintendo platform. Admittedly it won’t be to everyone’s liking, but is to mine and for the price it asks ($7.99,) I think League of Evil is most certainly worth it!