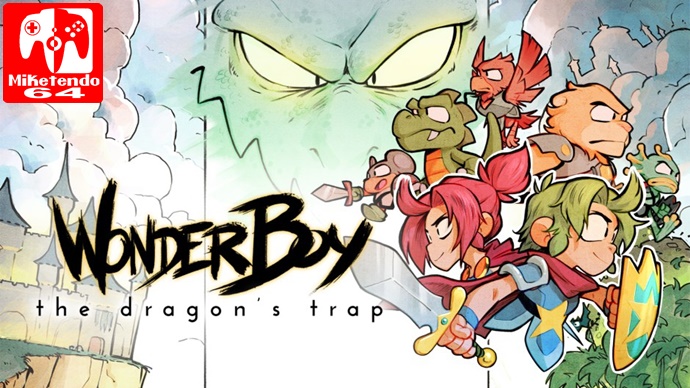 Normally Jack pens most of our reviews but I thought I would have ago this time so where should I begin? Well if you love the old style games where saving progress was unimaginable and gameplay was so hard at times, that it was a good thing that game controllers were quite tough and durable after the amount of times they would get thrown. Well, Here is a remake of one of those games that was originally released on the SEGA Master System back in 1989.

Wonder Boy: The Dragon’s Trap is about an adventurer who, after defeating the Mecha Dragon, is cursed and turned into a Lizard-Man. They must then travel through the different worlds and defeat all the other Dragons in order to change back into their original form. After defeating each dragon, the adventurer will be turned into another creature including, Mouse-Man, Piranha-Man, Hawk-Man & Lion-Man.

This remake takes the original game and builds on it so much so that it almost feels like a different game. All the modern graphics were hand-drawn and the music given a complete overhaul. However, fans of the original game can still get that retro feel if they like as you are given the option of changing the graphics and music to a more original setting just by the click of a button. I must admit though that after flipping through both options I much prefer the new HD graphics as the retro graphics are much harder to distinguish what is backgorund and what are platforms.

Gameplay is fun enough and plays a lot like Shantae as regards to different forms grant different abilities, buying equipment to aid attack & defense and varying platforms and terrain which means you will have to come back once you have gained a new transformation. It is easy to see that WayForward probably got a lot of inspiration for Shantae from the Wonder Boy series and vastly improved on the formula.

That’s not to say that Wonder Boy: The Dragons Trap is not a good game, It is actually quite a fun game but you are sorely limited to what you can do. In Shantae, you can transform at will whereas in Wonder Boy, you can only change after touching the floating spirit of the dragon you have just bested or if you find a secret transformation pedestal which changes you every time you step on it.

A lot of the old features are still in the game like the Password feature but a lot of new features have been added as well. You can choose the difficulty mode between Easy, Normal & Difficult. You can also choose to be Wonder Boy or Wonder Girl (which in turn will change the Title Screen). There are secret areas to find that weren’t included in the orginal game and some features have been removed like the need to acquire charm stones for when purchasing equipment.

If you have a fair level of experience with games like these, than you will do well. Those of you that require handholding to get to the next stage will have some trouble as this game has a knack to punish you every step of the way including ill-placed enemy spawn areas that hurt you when coming out of a door. Some enemies that can one-hit kill you with a single touch (unless you have some decent armour on) and the lack of direction when trying to get to the next dungeon will have you going back and forth like a Yo-Yo until you decide that enough is enough and look up a walkthrough online.

This game is a mixed bag of sorts. It has a lot of pluses and a fair few negatives which seems to drag out gameplay rather than extend it. It’s fun to play casually but when you decide to take it seriously, you can find yourself scratching your head as you try to find which way you are suppose to go. The Retro mode is a nice touch but one that I will rarely ever use due to how poor the Retro mode looks as it is difficult to distinguish the ground from the background and viceversa. I do enjoy the gameplay but I fear it will only last as long as the main playthrough as I don’t think I will replay it much afterwards unless a new mode is added or if a second player co-op mode is introduced but I am just surmising. However, I am sure there will be some dedicated souls out there looking to set the best speed-run record.

With my negative thoughts aside. the gameplay is fun, the music is enjoyable to listen too and the price tag of €19.99 is not going to break the bank and doesn’t take up too much space on the Switch’s internal memoriy either. I feel this game deserves an 8/10 in respect for what it is, the love that has gone into it to be remade and given new life whilst not being to costly either.