[Literature] Get a Load of The Newly Revealed The Legend of Zelda: Legendary Edition Volume 5 Manga Cover

May 6, 2017 amazon, Literature, The Legend Of Zelda, The Legend of Zelda: Legendary Edition, Viz Media 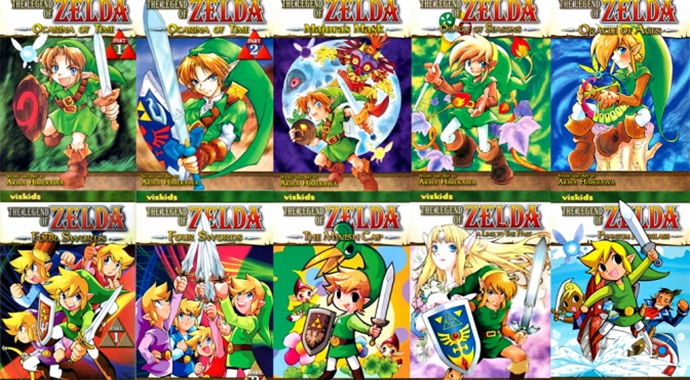 Just a few days ago, Volume 4 of the VIZ Media published The Legend of Zelda: Legendary Edition mangas its release  and with one more release to go, this week on amazon, the cover for Volume 5 can finally be viewed and admired.

Brown seems something of an odd choice, but the illustration is as good as ever and it will be the last one like this we see as Volume 5 is the last in the Legendary Edition series, but hey, it’s Four Swords and if that cover isn’t enough to tempt you to purchase it when it releases on the 11th of July, maybe it’s description will:

Link finds himself broken into four different versions of himself—Green, Red, Blue and Violet Link—and pitted against a fifth, the malevolent Shadow Link, who has kidnapped Princess Zelda. The Links must find the Four Sword, the only thing that can combine them so that they are strong enough to stop Shadow Link and save the princess—and the world!

For those of you who would like to know even more about the manga, as well as the other 4 Legendary Editions and even the Twilight Princess mangas, be sure to click on any of the links below that take your fancy:

And this concludes today’s literature news, thank you for reading!

The Sequel to Zelda: Breath of the Wild Delayed Until Spring 2023