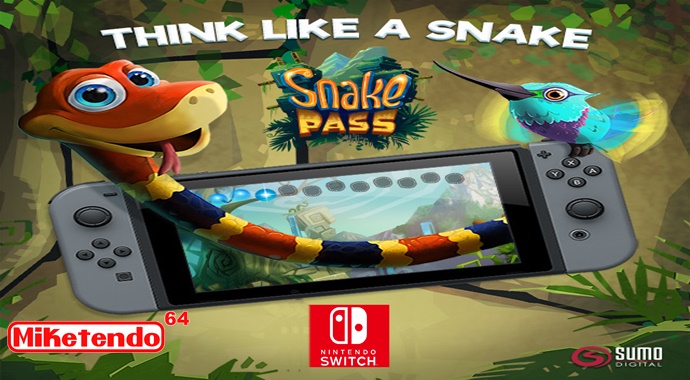 Snake Pass is Slithering its Way to the Nintendo Switch!

Wants some Serpent themed Switch news? Then here it is, Snake Pass is coming to the Nintendo Switch and you know what, it is a welcomed edition as it appears to be one engaging puzzle platformer! But there is no news like this without an official press release, so here it is:

“Sumo Digital today announced that its eagerly anticipated, serpentine puzzle platformer will be released on the upcoming Nintendo Switch™.

Snake Pass is a physical action-puzzle game that sees the player control Noodle the snake: slithering, curling and climbing their way through increasingly challenging worlds filled with evermore intricate obstacles and fiendishly mind-bending objectives! Snakes have never been so charming.

With a glorious graphical style, Snake Pass challenges players to ‘think like a snake’ as they tackle precarious puzzles and explore the captivating environments of Haven Tor.

Snake Pass will release on Nintendo Switch in early 2017, simultaneously with other formats.

Snake Pass is the wriggling brainchild of Seb Liese, who originally came to Sumo from Holland to work on the LittleBigPlanet team. His prototype of ‘real snake physics’ captured the entire studio’s imagination, winning the company’s first internal game jam. After which a dedicated team of Sumo pro’s was deployed to create fully fleshed out worlds of reptilian platforming.”

As well as Switch, Snake Pass is also confirmed for PlayStation 4.