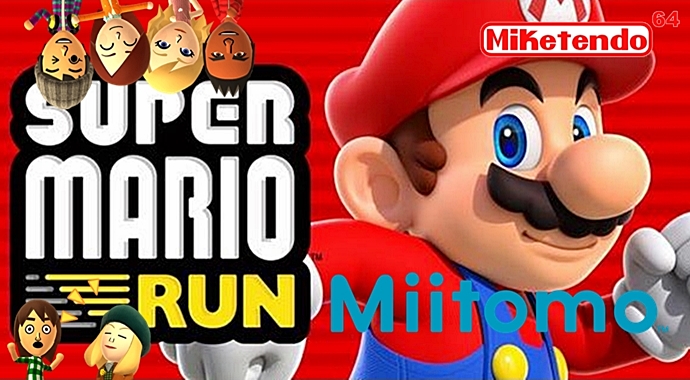 Now that Nintendo’s “Corporate Management Policy Briefing/Nine Months Financial Results Briefing for Fiscal Year Ending March 2017” a whole ton of news comes along with it, so get ready to see a ton of articles based on its contents and this is just the second.

Last year Miitomo final became the app it was supposed to be thanks to a huge update and Super Mario Run was released. During the briefing Nintendo’s briefing went on to discuss how both games/apps were received after their new update/release. Here’s Tatsumi Kimishima’s official comments regarding Miitomo and Super Mario Run:

“We also released a major update for Miitomo in November last year as part of our ongoing efforts to bring enjoyment to our consumers. As a result, we have seen an increase in active user volume for this title.”

“First, I would like to once again state Nintendo’s three main goals for our smart-device business. We would like to utilize smart devices as a platform to reach the maximum number of consumers with our IP. It is a prerequisite that the smart-device business be profitable on its own. We also aim to generate synergy with our dedicated video game systems business to maximize the potential of Nintendo’s overall business strategies. I have also shared in the past that we strive to ensure that each title we release for smart devices provides a high-quality game experience that is optimized for smart devices.”

Following these principles, we released a new type of Mario game that you can play with one hand, Super Mario Run. It launched on iPhone and iPad in December. This release was not limited to the countries and regions in which we have offered products and services through our dedicated video game system business, and it reached a wide range of consumers worldwide. As we shared through a previous press release, in its first four days Super Mario Run was downloaded more than 40 million times, a record speed for the App Store. Since then, downloads have maintained a strong pace, and as of today the application has reached 78 million downloads.

Super Mario Run is free to download, and parts of each of its three modes are available to play for free. After paying a set purchase price of 1200 yen, all of the game content can be enjoyed without needing to worry about additional payments. The download numbers for this title have continued to grow since release. However, the number of consumers who have purchased the full game (made the in-app payment) has grown relatively slowly compared to the overall growth in downloads. We can really feel the effects of the feedback we received from customers who purchased the full game. We hope to solidify Super Mario Run’s position as an evergreen application that can be enjoyed by everyone, including children. For that reason, we are taking a number of steps to ensure that Super Mario Run can be enjoyed for a long time, both by those who have already made the full purchase and by those who have downloaded the application but not yet made the purchase. We are also taking steps in-game to raise the ratio of purchases among consumers downloading the application for the first time.”

“Here are some of the initiatives we have planned. For many of our consumers, it has been a long time since they last played a Mario game. Things that may seem easy or obvious to fans who have played recent Mario games may feel like obstacles to consumers who haven’t played a Mario game in a long time. We have added an Easy Mode setting that turns off the time and mistake restrictions. This setting with help users who downloaded the game and gave up in frustration to enjoy playing through the worlds at their own pace. We will also hold periodic events where golden Goombas appear in World Tour in order to create buzz.

“We will continue increasing the number of available countries and OS to ensure that more consumers can enjoy Super Mario Run. The iOS version released in Korea on February 1, 2017. We plan to release the Android version in March, 2017.”

This concludes our Miitomo & Super Mario Run portion of coverage regarding the Corporate Management Policy Briefing.