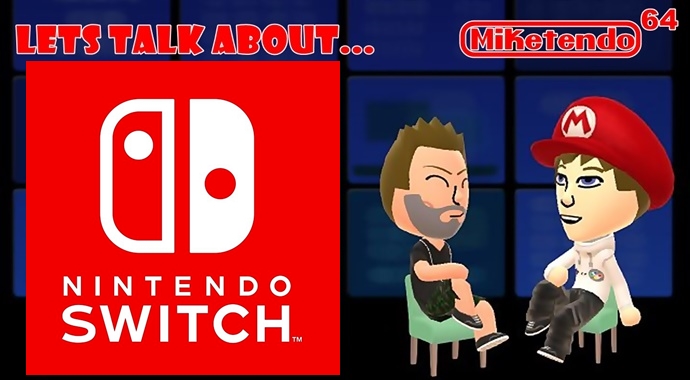 Let’s Talk About: Nintendo Switch (and the Presentation)

Hello and welcome to yet another instalment of Let’s Talk About, our series of discussion posts and videos dedicated to all things Nintendo! Be it a singular game, a game series in general, consoles or even Nintendo’s latest activities, you can count on us to talk about it! So with that in mind, today we dedicate this penned piece to the Nintendo Switch.

If you have visited the Miketendo64 website, Facebook page, or even just seen our Twitter activity, then you would be well aware of the fact that the small European news site that is Miketendo64, covered the entire Nintendo Switch presentation to the best of our ability. There was no way we could just sleep through such a huge event and then try and cover it throughout the course of the day, so we got up early and we watched the entire presentation. It wasn’t easy and a lot of news did in fact come out, but having watched the presentation myself, I’ve got to say I wasn’t all that impressed.

At least half the games we had heard about that were meant to be shown, were not shown, some of them still haven’t even been announced yet and someone of the games we saw, do we really need them? Obviously I am kidding as ARMS and 1-2 Switch are interesting and ARMS could very be the new IP Nintendo mentioned they want to bring to the Switch, but with the exception of Breath of the Wild’s simultaneous release across all platforms, I find the line-up to seriously be lacking some quality first party games. Super Mario Odyssey is content ready and yet Nintendo have pushed it back way down the line and the upgraded port of Splatoon is now Splatoon 2, but even that won’t be releasing until Summer. But there was nothing said about Smash or even a Super Mario Maker port for the Nintendo Switch.

Sure Nintendo want to keep some things back so come E3 they can surprise us once more, but it was Eurogamer who reported Nintendo saying they wanted to ensure the Nintendo Switch had as great as a line-up as possible and instead it ended up having only a decent line-up at best. Even if the other games, like Smash wouldn’t be a launch title, it should have at least got a mention, instead all we have really is Zelda and ports of games we’ve played before on other consoles. I can understanding Nintendo wanting to ensure they have a top quality game for every season, thus making Splatoon 2 release in the Summer something to look forwards too, but Nintendo you dropped the ball on this one again. You were meant to wow us and instead you turned the Nintendo Switch into another Wii U.

Yes there is plenty of time for you to turn it all around, and yes games like Fire Emblem Warriors does look great and Skyrim confirmed (whooooo!) but you needed to go all out on this and have an incredibly strong launch line-up and you didn’t do it. The Switch doesn’t have the specs a lot of gamers wanted and while I did enjoy your explanations on Joy-Cons and am not put off by the news of having to pay for online services in 2017, but you are asking for more money than the Switch is worth. Sure in North America the Nintendo Switch is only $299.99 but the UK and Europe have to pay way more than that. Then our accessories are more expensive and so are the actual games for the console. I really wanted to love the Switch like I love my Wii U but right now there is a lot I do not like about it, but it’s not because of the console, but because of the way things have been handled.

But this is not a rant, or a declaration of “I hate Nintendo.” I love Nintendo, but I will not let sentiment get in the way of something that needs to be said. The presentation, as good as it was, it was not as good as it should have been and the line-up is nowhere near as decent as it should have been and while it is costly, I have still pre-ordered one. None of this has point me off the console, but right now this does feel like history is repeating and we’re witnessing another Wii U. Only this time Nintendo do have the games needed to make it a successes, they just need to ensure they get out in time.

Although there is something I’ve discovered, I seem to hate most names associated with the Switch and its games. Breath of the Wild? (Sighs begrudgingly.) Super Mario Odyssey? Really? Out of all the words you could have chosen including Fruitcake, you went with Odyssey? Then there’s ARMS, 1-2 Switch and my personal favourite (note the sarcasm) Splatoon 2. So far other than the few changes, we’ve not actually seen anything that makes it worthy of being called a sequel, it just seems and comes across as a polished version of what came before, but marketed as something different.

So to summarise, one good thing to take away from all this for me, is that my views on the Switch can only get better in the coming days and weeks and just as soon as I have the Switch clutched firmly in hand, exploring the Great Plateau, all of this will fade away. But also while the presentation was not the show that was expected, I did enjoy it and I don’t regret waking up to watch it, or the hours that followed that saw me working my fingers to the bone. Love it or hate it, the Nintendo Switch is here to stay!

This has been the written Nintendo Switch edition of Let’s Talk About. All views and opinions expressed are entirely my own and if you feel differently to anything I have said, then please by all means use the comments section below to have your say! We’d love to get your perspective on all this or you could give it a miss but recommend something else you’d like us to talk about instead! The choice is yours!