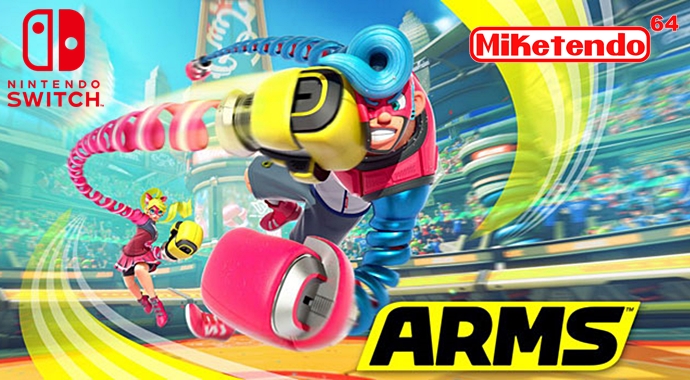 If you missed the presentation and haven’t been paying all that much attention to the many articles that graced the internet, than you may have missed out on hearing about ARMS.

ARMS is an all-new Fighting genre IP by Nintendo that launches this Spring. A game that takes full advantage of the Joy-Cons and contains fighting like you’ve never seen before. Now since the title does say Nintendo Treehouse Live, we do have the Treehouse footage of ARMS to share, but just before we get to viewing portion of this article, there’s a bit more reading to be done as we do have ARMS’ fact sheet to share first:

The first fighting game of its kind!:

“Choose a fighting champion from around the world, equip your own combination of extendable arms, and then use a mix of button presses and quick hand motions to really take the fight to your opponent. Throw punches and guide them midflight to hit agile fighters, avoid incoming attacks with dashes, or trampoline high into the air to rain down fists from above. Power-up your punches to deal extra damage or curve your fists around obstacles to hit skittish opponents. Fill up your special gauge to dish out devastating combinations and finish them off. Unleash your inner fighter in this unbelievable sporting event!

Even if this is a game that is not to your liking, it is hard to imagine owning a Nintendo Switch and not owning this game as well when it releases.