Skip to content
An Ode to Wii U Interview Wii U

An Ode to Wii U From 13AM Games 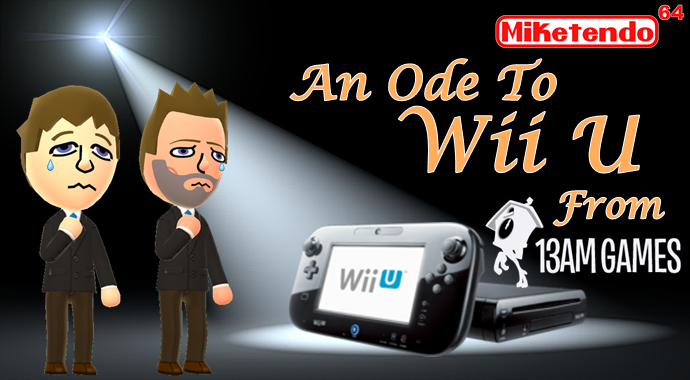 Welcome to the fourth instalment of An Ode to Wii U, our interview series, which sees us talking to indie developers to see what they thought of the Wii U. Answering our questions in this particular piece is Alex Rushdy of 13AM Games, you know that totally awesome indie company that gave us Runbow and the more recently published and released, Pirate Pop Plus:

“I’ll always love my Wii U as a gamer, as a developer I wish it caught a little more fire:”

Alex Rushdy: “As a gamer, I had a blast with the Wii U. There was no shortage of fantastic exclusive titles that appealed to me. I live for stuff like Bayonetta, Wonderful 101, Splatoon, Swords and Soldiers II, and quirky indie games. So for me the Wii U was right up my alley.

But as a developer that was also a problem. I recognize that my tastes in games are… Well, let’s just say specific. I also loved the Dreamcast and so much that came out for it, and it wasn’t successful either. Despite the Wii U having a library of games that directly appealed to me, it certainly didn’t appeal to the mass market.

So as a developer, the games you make have to appeal to that niche gamer and they also have to be low cost because the Wii U was always a super risky proposition, even back in 2014 when we started and the race wasn’t over yet.

So while I’ll always love my Wii U as a gamer, but as a developer I wish it caught a little more fire.”

“Communication with Nintendo was always clean, friendly, and super helpful. We love working with them!:”

Alex Rushdy: Thanks to Unity, and generous technical support from Nintendo alongside a talented tech team here at 13AM, developing for Wii U was fairly smooth. Not without its issues and hiccups, sure (we were the very first Unity game to incorporate online play- no small feat) but as a studio we are really comfortable with the machine.

The publishing processes needed a lot of work, but that is something we have seen Nintendo put serious efforts towards improving constantly.

We were able to complete the Wii U version of Pirate Pop Plus super quick thanks to our own familiarity with the hardware and Nintendo’s dedication to improving the development experience. And it’s really important to mention: communication with Nintendo was always clean, friendly, and super helpful. We love working with them!”

“Despite owning all consoles and a PC, I definitely spent the most time on Wii U:”

Alex Rushdy: “I think it’s found a niche… Or it did… Or maybe it didn’t… It’s such a weird, plucky little machine. It didn’t have the horsepower, it didn’t have the games library, but it did a few things really well

.I could go on and on about all the exclusive games I loved and whatnot, but I’d like to point out something that few people talk about: The UI. The Wii U user experience and interface is, IMO, a head and shoulders above its competitors. Not perfect, but much better. I know what to do on Wii U and how to do it without thinking. It follows the user-friendly, clean philosophy of companies like apple and throws as little as it possibly can between you and the content you want to use.

I remember getting my PS4 and just having a downright terrible time navigating the confusing, multi-tiered UI with several pages of options leading to more pages of more options. And don’t get me started on using the digital storefronts on Steam and PSN. They upset me. Bad UX really upsets me! So I’m really happy the eShop is the way it is. I know where to look! And I think that’s the big takeaway from the Wii U: Despite some shortcomings, it did some specific things incredibly well. It had these gems, like Miiverse, and controller options, and a better eShop that I believe will live on in future Nintendo hardware, so even though the Wii U might be on its way out, we will still feel its legacy in the Switch and whatever comes after that.”

Alex Rushdy: “You know, there are loads. Despite owning all consoles and a PC, I definitely spent the most time on Wii U…I really fondly remember playing through Captain Toad and just going “Wow, this is such a tightly designed, snug and warm little game.” It was like curling up with a good book next to a fire.

There were these transition moments between chapters where you could just walk around a bit and soak in the scenery, and I just kinda sat back for a few minutes and relaxed. It was a magical moment.

Also, Runbow was my first ever published game, so the Wii U will always be important to me. I vividly remember walking home at the end of Runbow launch day, downloading my own game, and playing it to completion in one sitting. That’s something I’ll never forget.”

Once again, we’d liked to take this moment to publically give our thanks, this time to Alex and Justin Fernandes for the role he played. It is always a pleasure to talk to the guys over at 13AM Games and if you want to see our previous discussions, you can find links to our previous interviews below:

For more An Ode to Wii U goodness, make sure you stay tuned to Miketendo64 in the coming days/ week, as we have at least one more instalment planned before our huge End of the Year one. Be sure to Like & follow us on Facebook, or Follow us on Twitter to make sure you get to see the next instalment as soon as it is posted. Or, as this is the fourth instalment, you can click here to see what Jay Kidd of Wraith Games had to say about the Wii U, or here for what Upfall Studios’ David Amador had to say. Or here for what Ratalaika Games’ Adrian Vega had to say.