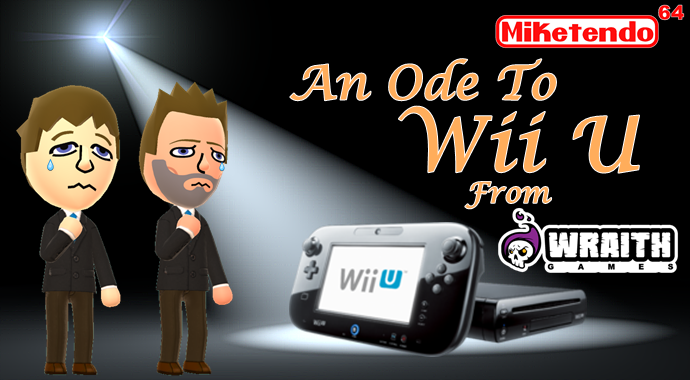 An Ode to Wii U From Wraith Games (Interview)

Welcome to the first instalment of An Ode to Wii U, our newest interview series, which sees us talking to indie developers to see what they thought of the Wii U. Answering our questions in this particular piece is Jay Kidd of Wraith Games, an indie company who will be bringing Collapsus to both Wii U and 3DS:

“I love the thing. Despite its Flaws:”

Jay Kidd: “I love it, and to be honest, most of the rest of our team does as well. I often tell a story about how when I first saw the DS and Wii shortly after each of their announcements, I was incredulous (at best) about them, to the point where I didn’t pick either of them up until about a year after they released… where I then fell in love. I started to with the 3DS as well, but ended up picking it up about 3 months after launch; but when I felt that same sense creeping up on me about the Wii U, I actively told myself to “stop it”! I picked one up on day 1 and never looked back. I love the thing. Despite its flaws (and there really are some).

For starters, I really think the name shot it in the foot pretty early on. There were ads, Toys R Us was a big one that advertised the GamePad as if it was an expansion for the Wii (even picturing it with a Wii rather than a Wii U) that didn’t help. Even if they wanted to stick with the “Wii” part of the name, I remember seeing a Japanese commercial calling it the “Super Wii” (to help explain what it was in comparison to the Wii) and all I thought was: “Hey! Why aren’t they calling it that!?”

The understocking was another big problem. We saw that again with Amiibo and NES Classic. Not good! There was also the issue with system-based purchases (as opposed to account-based) in the beginning. The whole roll-out was a mess!

A lot of people talked about how it never seemed like there were enough good games for the system, and I’d have to disagree with that. There’s also this talk from fans, not the developers themselves, about how “hard it was to develop for”. Both just simply aren’t true. They also talk about the power of the console, though if you look through all the past generations, the weakest console tends to sell the best.

If we’re being honest, none of that mattered. Once the image problems started, the system was doomed. It never really mattered how true those latter complaints were, it was all about perception. When Nintendo started doing all of that YouTube and fan-game take-down nonsense that was the final nail in the coffin as far as many gamers were concerned.”

Developing for Wii U is Easier than 3DS with Unity:

Jay Kidd: “Surprisingly easy! We’re still not allowed to talk about specifics since we’re still under NDA, but especially since we were working in Unity, it’s all pretty straightforward. The 3DS on the other hand… yikes!”

“The Wii U didn’t need every game under the sun to be amazing… it just was!:”

Jay Kidd: “It’s no secret that Wraith started out as a group of friends. So when I talk about my “friends” playing on the Wii U, a good chunk of them are team members. My best friend, Thorne, fiancée Kristy, brother Cody, writer Eric, programmers Natalie and Adam, and even former programmers Kyle, Geoff, and Julie would play (as well as many of our other friends), would spend HOURS playing Smash, Mario Kart, and Nintendo Land together.

Throne, Cody, and I still play quite a lot of the three Mario games, Donkey Kong, and Kirby together while passing the controller back and forth with Zelda, Shovel Knight, and even the new Shantae game (the Kickstarter rewards were just sent out and it’s what we’ve been playing this weekend whilst sick).

Yes, we mainly only played first and second-party or indie games on the system, but if I’m being completely honest, I’ve got Steam for everything else! Nintendo games, or at least games with that “Nintendo charm” are what belong on a Nintendo platform. The Wii U didn’t need every game under the sun to be amazing… it just was!”

“I get a Nintendo system for that magic that it has:”

Jay Kidd: “Like I said before, I get a Nintendo system for that magic that it has. The ability to sit down and feel like a kid again (even with the more mature games… there’s just this “spark”, you know?) We have a PS3 and PS4 on site and I have played the Xbox One, but there’s really no comparison. To me, personally (and I don’t really speak for the rest of the team on this) but Sony and Microsoft are just making more limited, locked down gaming computers. I have a gaming computer; I don’t need a PlayStation or Xbox.

Nintendo always comes up with an enjoyable gimmick that they design their games around the gimmick came from ideas they had for certain games. It’s a circle. Everyone talked about how gimmicky the Wii remotes were back in the day while they scrambled to copy them. That’s where we got the Move and Kinect. I remember this vividly, I believe it was E3 2013, when Ubisoft started pulling support for Wii U, speaking of them very unfavorably in comparison to the Xbox and PlayStation. That was when they announced that one of their games could play The Division with your tablet (a feature that they later cancelled, mind). It honestly boiled my blood! Nintendo isn’t perfect, but they deserved better than that. As for the 3DS, I don’t know if I can compare them, really. It was the real money-maker… and for good reason! It was simply amazing! My one wish was for more cross compatibility between the two. More cross-buy and maybe an ability to share saves between them. Hopefully the Switch will fix those woes!”

As always, it is a pleasure speaking with Jay, your answers were as great as always and should anyone wish to hear more from Jay, why not check out our previous interviews with him, by clicking on the links below:

Lastly, An Ode to Wii U is just getting started and we will have a second Interview piece posted later on today. “Who will be hearing from next?” For the answer to that question, be sure to come back later, Like & follow us on Facebook, or Follow us on Twitter to be notified as soon as it is posted.