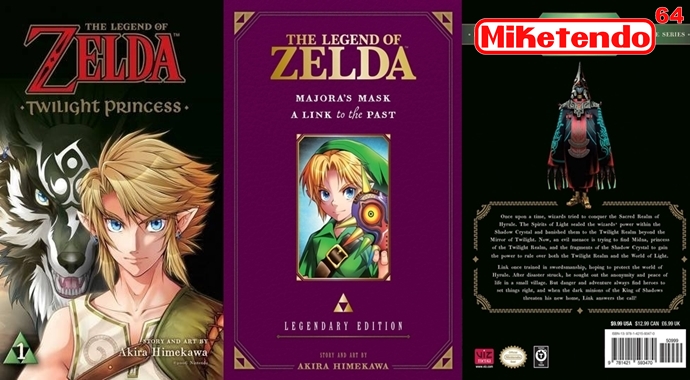 It’s Zelda news manga time and instead of one cover to spoil you with, we have two and first up we have the Twilight Princess manga.

Volume 1 of the Twilight Princess manga is to release next year on the 14th of March, in paperback format, consists of 200 pages and can be pre-ordered here for the price of $9.99 US dollars. Also now that your mouth might be watering after seeing that awesome cover, here’s a bit of reading for you pertaining to the product description.

Link once trained in swordsmanship, hoping to protect the world of Hyrule. After a fateful meeting, he sought out the anonymity and peace of life in a small village. But danger and adventure always find heroes to set things right, and when the dark minions of the King of Shadows threaten his new home, Link answers the call!!”

But Twilight Princess Volume 1 isn’t the only Zelda manga releasing on that day, Volume 3 of the The Legend of Zelda: Legendary series is also releasing on the 14th of March. It consists of both Majora’s Mask and A Link to the Past and thanks to amazon, we can now share the cover art with all of you:

Volume 3 is available in paperback, has 402 pages and can currently be pre-ordered for $17.99, but note that is its actual price as it is not currently on offer. Now I don’t know about you, but I will certainly be picking up both when they release next year!


Categorised in: Manga, News, The Legend Of Zelda