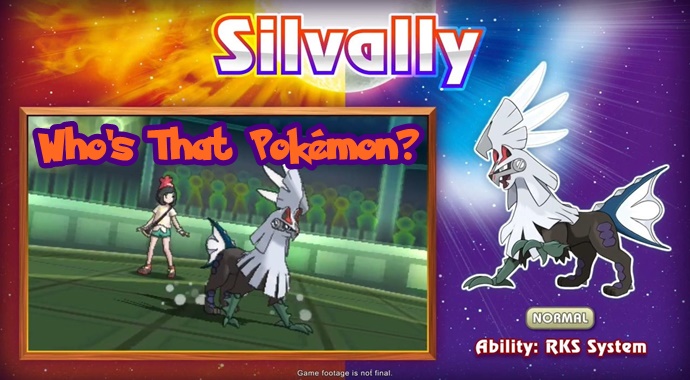 Welcome back to Who’s That Pokémon? the feature series regarding the Pokémon we can expect to see in the upcoming games. From Rowlet to Tapu Koko, and Drampa to Ash-Greninja, we have covered them all, but now we have another eight Pokémon to cover, so get ready for another instalment of Who’s That Pokémon? We dedicate this edition to Type: Null’s evolved form, Silvally!

Description: “When Type: Null gains a partner it can trust, it deliberately destroys the restraining device it wears. Once released from that heavy mask, the Pokémon’s speed increases substantially. Freed of the restraining effects of its mask, Silvally’s senses are heightened, and it reverts to its natural temperament. It has a wild nature, but it will obey a Trainer that it trusts. And to protect that Trainer from danger, it will put its own life on the line. Silvally is said to have been created to oppose a threat…

By inserting exclusive items into the drive on Silvally’s head, its RKS System can be activated, causing Silvally’s somatic cells to mutate and glow. The RKS System enables it to change its type, and its cells glow with different colors of light, depending on its type.

Silvally’s Ability is called the RKS System Ability, which no previous Pokémon has ever had. By having Silvally hold items that correspond to each Pokémon type, it can change its own type. Multi-Attack is a move that only Silvally can learn, and this move’s type changes based on which type-related item Silvally is holding.”