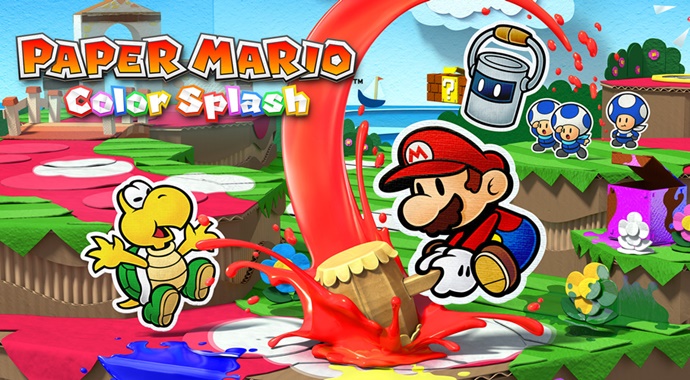 It has been a while since I have actually done a review myself but with the recent release of Paper Mario: Colour Splash on Wii U, I have decided it was for the best to take hold of the Review Reins in my own hands and pen it myself (or rather type it myself). So here is my review on what is probably Nintendo’s last first-party game for the Wii U this year.

There have been a lot of mixed feelings about this game ever since it was announced earlier in the year. Some relished that another Paper Mario game was making a comeback, others dreaded that it might be another Sticker Star debacle, I on the other hand, was hoping that it would go back to basics and play like the original Paper Mario on the N64. I was quite relieved to find that it actually did maintain some of the qualities that made Paper Mario 64 so great! The game is by no means a copy of any of the others though the same elements that make a Mario game are all present, Mario? Check. Princess Peach getting Kidnapped by Bowser? Check. Ever increasing difficulty in levels? Check. Everything is all there but it is still enjoyable and fun if not more so.

It’s a dark stormy night and two hooded figures are making their way to a little cottage where a known plumber happens to live. Mario opens the door to which the two figures reveal themselves to be a very solemn Princess Peach and Toad. They hold in their hands a letter which turns out to be toad shaped and is in fact a toad that has been drained of it’s colour, Mario takes a look at the address that is stamped to the back of the Toad’s head and notice’s that it is addressed from a place called Prisma Island. On board a ship, Mario, Peach & Toad brave the stormy seas to arrive at Prisma Island. The place is a ghost town which white patches all over it. After looking at the supposed rainbow fountain in the middle of the town which is now bone dry of colour, Mario & Peach activate the secret chamber and release a paint can called Huey. Mario is later ambushed by Shy guys with Straws which have been sucking the place dry of colour. After beating them, the gang go back to the fountain to which Huey reveals that there used to paint stars that gave life and colour to Prisma Island and they seem to have disappeared. This is where Mario comes in and promises Huey that they will find the Paint Stars and return Prisma Island to it’s former glory.

Paper Mario plays like a Adventure/RPG with a lot of the status increasing elements taken out of it. It uses a turn-based battle system that pit Mario against several different enemies at a time. You can also increase the amount of times you can attack with card slots which you collect in game and you attack enemies with battle cards. Battle cards are essential to the game’s battle mechanic and can have a large array of attacks including Jump, Hammer, Fire Flower, Ice Flower, POW blocks and more. Though there are no companions other than Huey, and none of which fight alongside you. You can however, play enemy battle cards which you pick up during your adventure which, will bring your chosen baddie into the fray and will in turn, attack enemies for you and will take damage for you until they are defeated. You can also use “Thing” cards which will bring objects into the battle that can severely change the course of the battle to your favour (my personal favourite at the time of writing this review is the breakdancing piggy bank). The button techniques are easy to learn and take a while to master or you can use the gamepad’s touchscreen to select cards, administer combos and more. movement can be a bit tricky at times and there is a lot of to-ing and fro-ing on each level to maintain replayability to complete them all. There are also mini-games scattered around in some levels that can reward you with cards and coins.

The graphics are amazing and are probably the best seen yet in any Wii U game. They are crisp, colourful and truly accentuate the fact that this world you are traveling is really made out of paper and card, the care that has been taken to make every pebble look like a piece of card, bushes have folded stands, trees have little supports that hold them up, it is like taking a journey on a giant diorama. There is no pixelated or fuzzy edges to be seen anywhere unless purposely added. It is a graphically masterpiece that make all other games on the Wii U like they could use an overhaul.

Where do I start with the audio? As usual, it uses a lot of the sounds and audio from the other Mario games but a lot of them are revamped and bring a refreshing feel to the game, it is familiar yet new at the same time, there are a lot of tunes that you may or may not have realized like during some of the minigames, the backgound music is that of Super Mario Bros 2. The sound effects also do their job well and really do set the tone for the game, there was one part in the Indigo Underground that almost had me out of my chair, it was that creepy.

Well, I guess it is that time again where we give a list of Pros & Cons so here it is:

This is definitely a game worth adding to the Wii U Library as it is great fun to play and immerse yourself in. I have been plying it non-stop since I got it and I am still enjoying it. Though this is not the game that would make you buy a Wii U, if you already have a Wii U, then you should definitely add this game to your collection. It has all the adventuring mechanics of all the other Mario games, with a splash of colour (See what I did there), humour, easy to learn RPG mechanics and a truly unique spin on the Paper Mario series by using “things” that seem like normal household object and turning them into weapons of mass destruction… to paper villians of course!

So I shall give this game a truly well deserved…