Skip to content
Reviews The Jacktendo Review Wii U

SteamWorld Dig on the Wii U (The BiteSize Jacktendo Review) 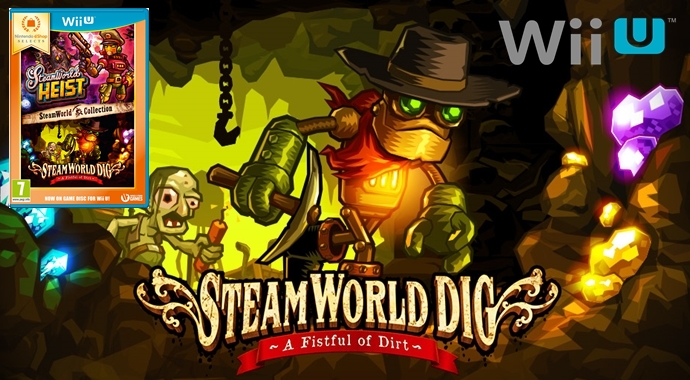 My name is Jack Longman and this is The BiteSize Jacketendo Review. Whereas The Jacktendo Review is my very own two-in-one game review that caters to all kind of readers as it consists of both a fast and a short review and a slow and long one, the Bitesize version skips the lengthy review. Instead it is a singular, smaller review and undergoing The BiteSize Jacktendo Review today is the HD version of SteamWorld Dig for the Wii U!

SteamWorld Dig: A Fistful of Dirt:

Developed by Image & Form, SteamWorld Dig is the same 2D platformer we saw first released in 2013, except this version is the glorious HD version that can only be purchased if you buy the fantastic SteamWorld Collection, which I did!

Cast as the protagonist is a Steambot called Rusty. He’s recently been left his uncle’s mine beneath Tumbleton, only it turns out is Uncle Joe has snuffed it and the mine harbours a whole lot of secrets, as well as valuable ore, which is a key focus of the game, hence the title of SteamWorld Dig! Armed with a pickaxe, you have to manoeuvre Rusty through the mine beneath the town to form a path through the mine, unearth rare minerals and uncover secrets, but it’s not a simple task.

The deeper you go, the more hazards you will encounter, such as dripping acid, spikes that shoot out the second you stand over them and even high-tech lasers. (Oh yeah, there’s a lot of high-tech in this game, such as Vectrons who wish to destroy you and a super advanced portion of the mine. The World of Tomorrow lurks below!) There’s also a bunch of enemies who like to bring the pain, but that’s okay, no matter how tough they are, Rusty has the means of becoming a lot tougher!

Not only can he upgrade the arsenal he has already by using the minerals and ore he collects, by selling it on, but he can also discover a drill that comes in hand and let’s just say, a little something that really packs a punch. You can also upgrade health, water consumption for using your advanced weaponry and Steam Jumps.

Dig may not be the longest 2D Platformer game in the world, but it is a pretty good one what with the stunning updated graphics, soundtrack enough content to keep you playing right up until the point you finish it, but leaves you want to play it again and that is always a great track. That being said, some sort of a New Game+ or something would have been a great addition, anything to keep the story going a little longer.

SteamWorld Dig may be no SteamWorld Heist, which I am still rather addicted too, but it is still a Steam packed adventure Steam virgin gamers will love, and since both Heist and Dig are available via retail in the form of SteamWorld Collection, now is the best time for a gamer new to the SteamWorld series to experience it for themselves. With all of the above now said and done, I can reveal my final score for SteamWorld Dig and it comes in at 7/10!