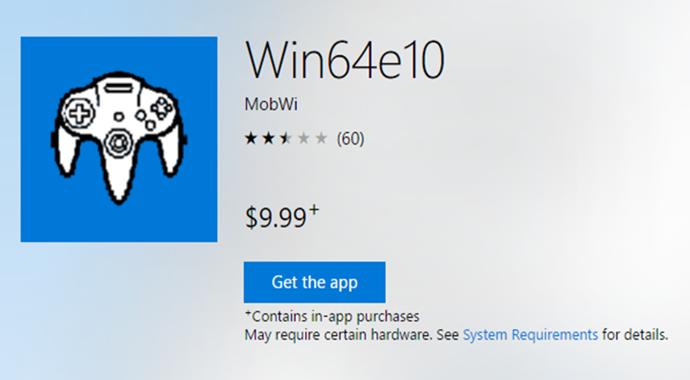 *UPDATE (27/09/16): Microsoft have since removed Win64e10 from the store and have instructed the developer to remove Xbox One support from the emulator, something they did with the creator behind the Nesbox.

If you own an Xbox One and wanted to play some classic N64 titles that aren’t available as Virtual Console titles for the Wii U, than you’ll want to snatch up the N64 emulator Win64e10.

The emulator, which is already available for PC and smartphone devices, will cost you just under 10 dollars and will let you play whatever N64 game you desire, including the Rare classics Banjo-Kazooie, Perfect Dark and Conkers Bad Fur Day.

This is by no means the only emulator we’ve heard about that’s coming to the Xbox, as we have previously heard about the Nesbox as well, but where does it stop? An emulator for GameCube games? DS games? You don’t see an Xbox 360 emulator on the Wii U, would be interesting if there was but it doesn’t mean it wouldn’t be wrong, because it would, a lot. But unless Nintendo do get involved or the emulator is removed for other reasons, it could be sticking around for a while.