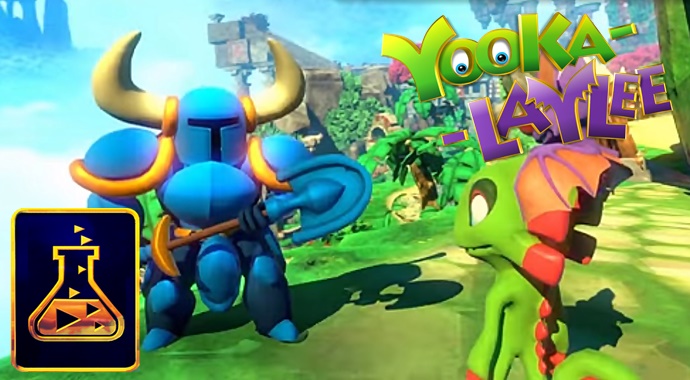 Shovel Knight continues to be a much loved character and just in case his appearance in Azure Striker Gunvolt 2 isn’t enough, he’ll also be turning up in Playtonic Games’ Yooka-Layee as well.

During their panel at EGX 2016, a trailer showcasing many of the characters from the upcoming title, including Shovel Knight, was shown and it was revealed that the inclusion for Yacht Club Games’ marvellous creation came to be when Playtonic and Team17 were discussing the idea of featuring a guest character.

Naturally the discussion turned to Shovel Knight, as it is a “much-loved game” and that the team behind the game “shares the same kind of values we do as developers and has created something fantastic in the past.” It was also expressed that they wanted the guest character to be someone who could appear on all platforms. Playtonic then approached Yacht Club Games who were clearly happy to oblige and went through all of Playtonics steps in how they create their mumbling voice.  According to a new post up on Yacht Club’s official site, Shovel Knight is voiced by Sean Velasco and the team designed and built the Shovel Knight model, but it was Playtonic who then “rigged and animated it to life.”

Also revealed is the fact that as of now there are no other guest characters, but they are open the idea. Whether he will be a playable character in some way remains to be seen as he is referred to as an NPC by Laylee.

It’s nice to see Shovel Knight burst into 3D as it was an idea Yacht Club Games had been toying with, which was if they were to create another Shovel Knight Game, they would model it on the likes of the 3D Platformers of the N64 era. It will be interesting to see with Shovel Knight brought into the 3rd dimension in Yooka-Laylee, whether Yacht Club Games will start putting the idea into motion.


Categorised in: Footage, News, Wii U