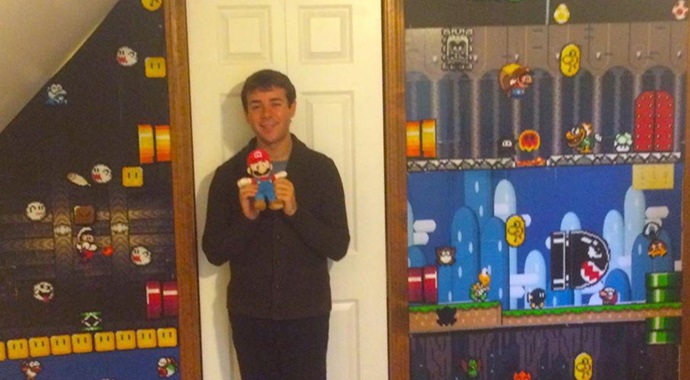 Meet the Man with his Very own Perler Bead Mario Room

Let’s be honest, as gamers there are games, nay games series’ that we simply adore and can’t get enough of. For me that series is The Legend of Zelda and for one Jonathan Major, he loves the Super Mario games, so much so he’s made his very own Super Mario World themed room.

I first saw Jonathan’s masterpiece in a post on Facebook, in a Super Mario Maker group I’m a member of (Super Mario Maker Level Share,) and because I loved what I saw, I invited Jonathan to share his story on the Miketendo64 website, and so with today being the 31st anniversary of the Super Mario franchise, here’s Jonathan to take it away and tell us all how his room came to be:

My inspiration for Perler Bead crafting started 3 years ago, but my passion for older Nintendo games dated earlier than that. I grew up playing classic Nintendo titles my whole life and I still play them to this day. When I learned you could recreate video game characters with precise detail using perler beads, my interest in crafting was born. I started with simple character designs, which did not require much detail. That was until one day I was influenced by the YouTube video titled My Games Room – Nintendo Perler Beads Super Mario World Sprite Wall, by YouTube user ukretrogameaddict. (*For anyone wanting to check out the video, you can find it at the end of this article, or just click on the name to be taken directly to the video on YouTube.)

In their video, they decorated part of their wall in the style of Super Mario World. This was one of my favorite games growing up, and I had wished to one-day do a project such as theirs. It wasn’t until a couple years later that I decided to take upon the challenge of completely decorating one side of my room in a more complex theme. I knew it wouldn’t be easy, since I am very spatially challenged, easily overlook structured patterns because of my dyslexia, and overall not very artistic. However, I knew if I worked hard, had fun, and enjoyed the process, maybe it would not be so bad. This project lasted about three to four months (with some time off in-between because of work,) and I personally loved every minute, even with some of the issues arose. With much work and dedication, I was able to complete my wall a couple of days before my personal dead line, just in time to honor the 31st anniversary of the Super Mario Brothers franchise. Below, I’ll walk you through the basic process I went through in completing this project:

Step 1: Understanding the Dimensions of the Wall I Wanted to Decorate:

Before crafting anything, I decided to measure the dimensions of the walls I wanted to decorate. This would give me a basic understanding of how much room I had to work with.

Step 2: Deciding What I Wanted to Present on My Wall:

After deciding I wanted to do a Super Mario World theme, I had to decide what specifically I wanted to have. Super Mario World contained many worlds and levels, all with unique looks and locations. After measuring my wall, I decided I had enough room to fit two level themes on the left side, and about four on the right. I knew I wanted them to have a connection to one another, so I decided to use specifically colored warp pipes to show where they led. Before creating anything, I decided to create a computer-generated image of what I planned to put on the wall. It was difficult, because I knew everything wouldn’t exactly appear to be in the same dimensions as they did in the preview. Below is an early blueprint of what I thought part of my wall would look like, as you can see it is much different than the final product!

This was personally my favorite part of the whole project and it was more complicated than past Perler creations I had done. This was due to the fact Super Mario World had much more detail to their characters compared to Mario games before it’s time. For those who aren’t familiar with Perler Beads, they are beads which can come in a variety of colors and shades. To make a creation, you’ll need the beads, a pegboard, parchment paper, iron, and masking tape (optional.) To start, you’ll have to find a pattern for the object you would like to make. A simple Google search can give you what to go off of (for example, I got my Bowser Pattern by Deviant user Anphobia.) However, there were some objects I had to completely improvise off of. For example, a majority of the ground, lava, pipes, and some characters did not have patterns. I had to find the character image and enlarge it, making it more pixelated. This would help identify what colors and the amount of beads I needed. A final helpful tool was the app Bead It, which would help take an image and show what colors and how many beads to use. After making the creation on the pegboard, I used an optional method known as the masking tape method. Basically this transfers your creation off the pegboard so you won’t damage the board while ironing. When ironing, I would use the parchment paper as a barrier. I would iron one side more, so the other side appeared to be more pixelated looking. There are many tips and tricks when it comes to Perler beads, if you are interested please look more into the topic J.

Step 4: The Backgrounds and Putting The Pieces Together:

This was a tricky part in the planning of my project. I knew I wanted to display the backgrounds as vibrantly as they were in the game. After much brain storming, I was able to think of a solution. I first ordered some corrugated cardboard as close as the width as my walls as possible. I ended up getting 2×3 ft sized cardboard, in which I had to eventually add an extra half foot in order for them to fit the right side of my wall. After, I found backgrounds I wanted to use and enlarged them to the dimensions I needed. I used a website called rasterbator.com, which takes large images and allows you to print sections of them page by page. After going to a specialty-printing store, I was able to get the prints I needed. After cutting off the borders of the pages and arranging them in the proper order, I was able to rubber cement them to the cardboard. Allowing everything to dry, I made special incisions depending on if I needed to make rooms for outlets or anything else. In order to assemble everything, I used Velcro to attach the Perler creations to the backgrounds so I could remove them easily without damaging anything. Finally, I used thumbnails to attach the cardboard canvases to the wall.

Step 5: The Art of Improvisation and Hiding Errors:

Like any old game, this project did have its glitches. However, finding ways to help hide the blemishes allowed me to think outside of the box on some issues. A recurring problem was with the backgrounds and the white borders. It was very tricky cutting each page precisely, which was needed if you didn’t want any white space showing. I used markers to match the colored background and filled the white spaces to make them less noticeable. Also there were a few errors, which may be seen as inconsistencies with the game. When creating the Boos (ghost characters,) I realized I had none of them closing their eyes. They do this when Mario is facing them and since I had none of them doing this, it would mean they all would be clustered on one side. I decided to use a Mario sprite, which made him appear to turn back quickly. By doing this, it could be interpreted the Boo did not have enough time to react. In all, even though there were errors, I was very pleased with the overall outcome of this project.

I hope you enjoyed my tribute to the 31st anniversary of Super Mario Brothers and enjoyed reading over the process. Here is to many more years of gaming!

Thank you Jonathan for sharing your process for creating your Marvellous Mario Room! Should any of you reader this have a story or Nintendo related personal achievement that you would like to share, you can either comment below. Find us on Facebook. Tweet us, or just send an email to: miketendo64@gmail.com! It really is as simple as that.