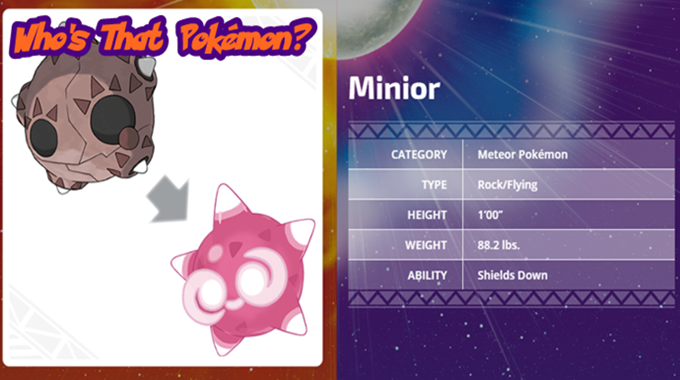 Welcome back to “Who’s That Pokémon?” the feature series regarding the Pokémon we can expect to see in the upcoming games. From Rowlet to Magearna, and Tapu Koko to Mudsdale, we have covered them all, but now that a huge amount of new Pokémon and Alolan versions of Pokémon we’ve already seen before, it’s time for a lot of new additions of Who’s That Pokémon? and in this particular post, it’s all about Minior!

Description: “Minior are formed in the stratosphere and live by absorbing the detritus around them. When they’ve consumed a large quantity of particles, their bodies become heavy, and they fall toward the planet’s surface. Minior has a hard and heavy outer shell with a core inside it. The Meteor Pokémon seems to be made in such a way that if its shell breaks, it becomes lighter and can deal out quick attacks.

When its shell breaks, the core in its centre is revealed. You won’t know what colour will appear until this happens!

Minior has the new Shields Down Ability, which no other Pokémon has had before. With the Shields Down Ability, it will have excellent defensive capabilities as long as its shell is intact. It will also be protected from status conditions. But when its HP drops below half, its shell will break, and it will change to a form better suited to attacking.”

“Minior’s core will change color depending on the particular color of the debris it has absorbed. Its pastel coloration has a cute look, so this Pokémon is often used as a design motif for clothing and accessories.”