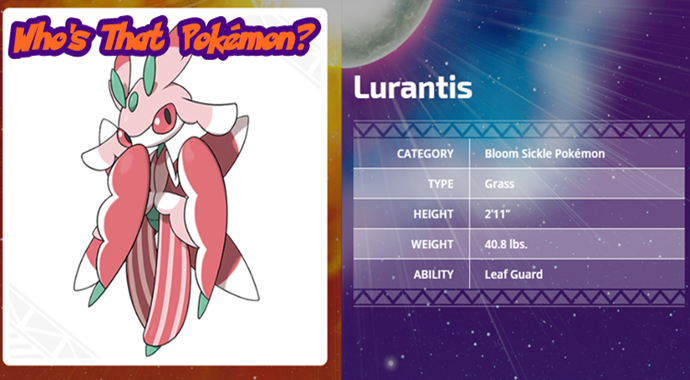 Welcome back to “Who’s That Pokémon?” the feature series regarding the Pokémon we can expect to see in the upcoming games. From Rowlet to Magearna, and Tapu Koko to Mudsdale, we have covered them all, but now that a huge amount of new Pokémon and Alolan versions of Pokémon we’ve already seen before, it’s time for a lot of new additions of Who’s That Pokémon? and in this particular post, it’s all about Lurantis!

Description: “Lurantis draws opponents near to itself with its flowerlike appearance and aroma—and then it takes them down. It’s said to be the most gorgeous of all Grass-type Pokémon, due to its brilliant coloration and elegant moves. Lurantis’s appearance is maintained through detailed grooming. It will trust a Trainer who does a good job of caring for it, but it will apparently have a difficult time growing closer to a lazy Trainer.

Lurantis can learn Solar Blade, a move that releases a blade-shaped beam to mince up its foes. The blade is so sharp it is said it can slice a rock in half! Solar Blade is a move that no Pokémon has been able to learn before. With Solar Blade, Lurantis absorbs energy from the sun on the first move and then unleashes a powerful attack on the second turn. Lurantis is the Totem Pokémon of Lush Jungle, the site of an Akala Island trial. It will overwhelm trial-goers with the powerful combos it unleashes with the Pokémon allies it calls.”