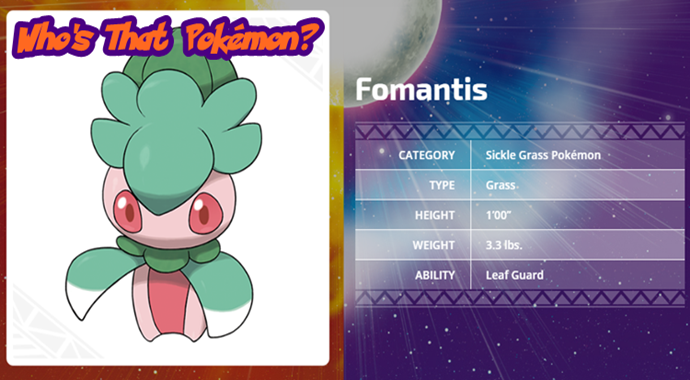 Welcome back to “Who’s That Pokémon?” the feature series regarding the Pokémon we can expect to see in the upcoming games. From Rowlet to Magearna, and Tapu Koko to Mudsdale, we have covered them all, but now that a huge amount of new Pokémon and Alolan versions of Pokémon we’ve already seen before, it’s time for a lot of new additions of Who’s That Pokémon? and in this particular post, it’s all about Fomantis!

Description: “Fomantis is nocturnal, and it performs photosynthesis while it sleeps during the day by spreading out its leaves in all directions. Because of the danger of staying in the same location two days in a row, Fomantis begins its search for the next day’s spot as soon as the sun sets.

For Fomantis, photosynthesis is not just a source of energy—it is a necessity to achieve the strength and brilliant coloration of its evolved form. Photosynthesis is precious to Fomantis, and it will fiercely attack those who get in the way of that process.

Fomantis excel at long-range attacks like Razor Leaf and Solar Beam. Solar Beam is indeed a powerful move, but since it uses up the energy that the Pokémon has stored through photosynthesis, Fomantis rarely uses it.”