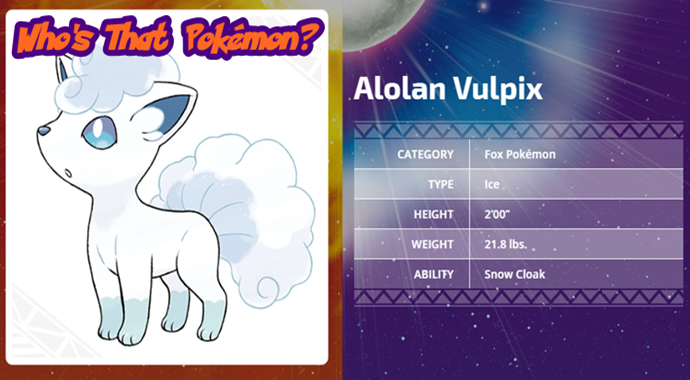 Welcome back to “Who’s That Pokémon?” the feature series regarding the Pokémon we can expect to see in the upcoming games. From Rowlet to Magearna, and Tapu Koko to Mudsdale, we have covered them all, but now that a huge amount of new Pokémon and Alolan versions of Pokémon we’ve already seen before, it’s time for a lot of new additions of Who’s That Pokémon? and in this particular post, it’s all about Alolan Vulpix!

Description: “It is said that Vulpix came to the Alola region together with humans, but the Fox Pokémon moved to the snowy mountain peaks to avoid the normal habitats of other Pokémon, and thus it ended up taking on this form.

These Alolan Vulpix live on high mountains that remain covered in snow year-round. They live in small packs of two to five individuals, helping one another survive.

Alolan Vulpix can freeze anything solid by expelling breath at a temperature of −58 degrees Fahrenheit (−50° C) from its mouth. It doesn’t fare well in the heat, but when the temperature gets too high, it produces ice from its tail to lower the surrounding temperature.”


Categorised in: Pokemon, Pokemon Sun & Moon, Who's That Pokémon?