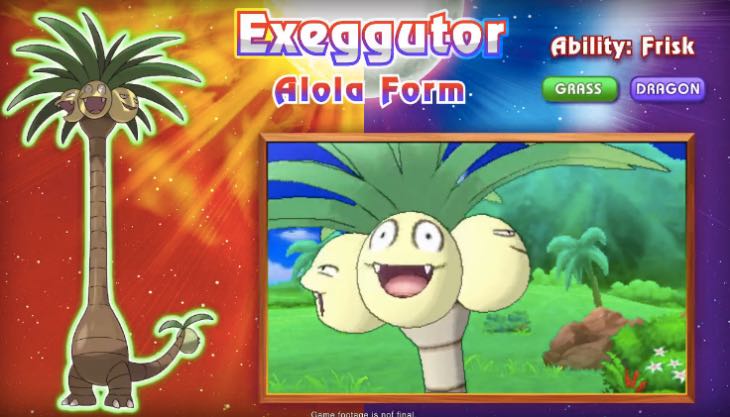 During yesterday’s reveal of Alolan forms for previously seen Pokémon, people fell head over heels in love with Alolan Vulpix and Ninetails (including myself), and others were attracted to Alolan Sandshrew and Sandslash’s cool factor (pun intended). However, one that’s just been the butt of the jokes is Alolan Exeggutor. However, I’m here to tell you that this dopey tree makes more sense than you think.

In 1997, the Jungle expansion was added to the Pokémon Trading Card Game. On the Japanese booster box, there is art featuring Exeggutor with an extremely long neck and no legs in sight. This could be alluding to the Alolan Exeggutor we just saw announced. The image is below.

Furthermore, in Ruby and Sapphire, Exeggutor’s Pokédex entry reads, “Exeggutor originally came from the tropics. Its heads steadily grow larger from exposure to strong sunlight. It is said that when the heads fall off, they group together to form Exeggcute.” This directly coincides with what we’ve seen of Alolan Exeggutor, and as we can see from 1997 and 2002, Exeggutor’s other form has always existed, we just haven’t seen it in a video game. Is it possible that the Alolan Exeggutor is its true form?

What do you think of Alolan Exeggutor? Let us know below!