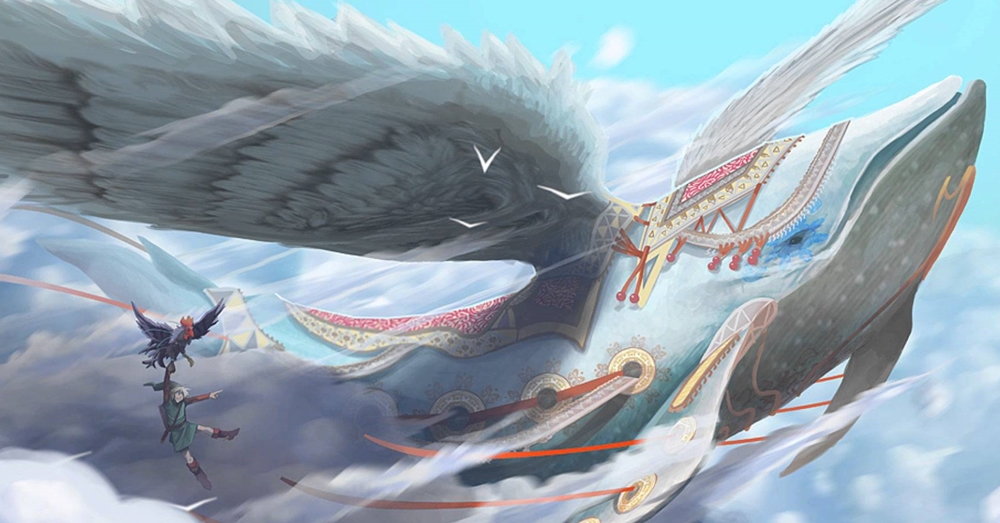 Just this month, with a new phone more storage space, so I got a bunch of new apps. Among them was Zelda Amino and already I’m having a lot of fun there, especially since you can see a lot of great content. Well recently I saw a theory posted by Dean Feller, which concerns the Twilight Princess Trio Agitha, Fanadi & Telma and their connection to the Wind Fish.

After reading it a couple of times, I felt the need to contact him and ask if I could share it on his behalf and he said yes, so thank you for that Dean and for the rest of you, I hope you like what you read:

(Warning! The following is a Zelda theory regarding Twilight Princess, by Dean Feller. All views, opinions and theories expressed here are entirely his own!)

Agitha, Telma and Fanadi – Sisters in Fish (a theory by Dean Feller)

Agitha, Telma and Fanadi are women living in the town of Hyrule during the Twilight Era. Each of them differs from the others like cheese to chalk, but that doesn’t mean they have nothing in common. Their relationship is based on much more than just having three colored dots in the face, but before we continue with that, first let’s go over each character:

She looks like a child, but dresses herself like an adult. She likes bugs (which is a pretty unusual hobby for a girl her age,) and she even calls herself the “Bug Princess.”

Agitha is most likely a descendant of the Kokiri, with her direct ancestor assumed to be Fado (who was originally planned to be the Sage of Wind in Ocarina of Time, but her as a Sage and the Wind Temple was scrapped.)

A fortune-teller that helps you to find the next piece of heart or provide directions and clues to help aid you with the main quest.

Her name is made of from the first two letters of each of the goddesses’ names (FArore, NAyru and DIn.)

With her red eyes, the Sheikah symbol on her forehead and her magical powers that overcome the magical powers of every ordinary Hylian, it is hard not to identify her as a member of the Shadow folk.

The owner of the tavern in Hyrule and an established member of the rebellion. She is a strong woman with extraordinary riding skills, and fights for what she thinks is right.

With red hair, darkened skin colour, and the style of clothes she wears, she’s clearly of Gerdudo heritage, which would also explain her temper, due to being an inherited characteristic, as well as a few others.

Each of these three women, all possess coloured dots under their eyes, which I believe is to symbolize the ancient tribes that they are all descended from. (Red = Gerudo. Green = Kokiri. Violet = Sheikah.) But why don’t they just display their own colours, instead of the colours of the others as well? Unless the bond between these three women is a much deeper one than just being they’re all survivors from ancient tribes that are thought to be no more.

But then there’s the characteristics of each one. Fanadi, being a fortune-teller, she possesses WISDOM. Agitha shows more COURAGE than anyone else in Hyrule, what with not only collecting bugs, but lives with them also. Then there is Telma, an extraordinary POWERful woman, who has her own business, and aids a resistance group in doing what must be done. Each one of them, in their own way, have the essences of the goddesses in them, which could either make them “2nd choice Triforce wielders“ (in the even Link, Zelda and Ganondorf were not present,) or they are the goddesses themselves, hiding behind an alternate ego (just like Ganondorf is something like an alternate ego to Ganon, who is an reincarnated ego from Demise.) Or just in reincarnated in human form like Zelda is Hylia. The latter is of course more likely, but before we forget, there is another in the Zeldaverse who has these three colours beneath its eyes, the Wind Fish from “Link’s Awakening!”

I believe that there could be an alliance between the Gerudo, Kokiri, Sheikah and the Wind Fish… or that the Wind Fish is simply another persona of the goddesses. If the first option is true, then it would open up more questions than it answers:

What triggered the alliance?

Did the alliance take place before Ocarina of Time, or after?

Why these three tribes in particular and not the Gorons, Zoras or anyone else?

Are there still groups of the Kokiri, Sheikah and Gerudos somewhere in the world, living on an island dreamed by the Wind Fish?

Can we find clues about this alliance in “Links Awakening?”

I look forward to get answers from Nintendo concerning this topic, although I think we’ll have to wait a long time as this won’t be covered in Zelda: Breath of the Wild, but maybe in a future title.

Now if you enjoyed this theory by Dean, we would suggest getting Zelda Amino and following him, as he promises to have more stuff like this soon. But naturally of course, with every theory there always holes to be found, what with the Wind Fish occurring during the Downfall timeline, and Twilight Princess taking place in the Child timeline, but even then that doesn’t actually mean anything. Just because the Wind Fish is from one particular timeline, that doesn’t mean it couldn’t be incarnated as something else, or someone else in another timeline. At the end of the day, the three races Dean’s theory is based around, are all present in Ocarina of Time, the game where the timeline split in the first place.

So yes hole or not, it is still possible and with Levias being present in Skyward Sword and theorised to be connected to the Wind Fish, essentially the Wind Fish could turn up in any game of its choosing, Ganondorf always has. At the end of the day everything is possible with Zelda. Me personally though, I’m more inclined to write trio off as each being a Goddess incarnate, what about you?

Until then, Keep on Gaming!