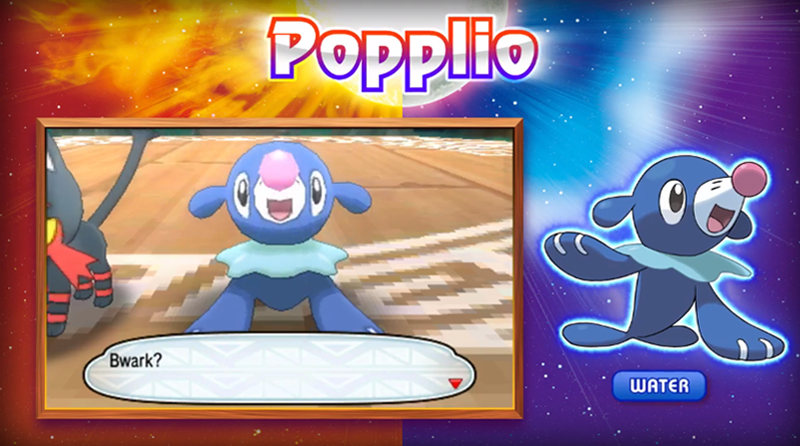 Talking ‘Bout The Next Generation: Gen VII – Popplio (The Pokémon Of Sun & Moon)

Hello and welcome back to “Talking ‘Bout The Next Generation,” the spin-off feature series of Talking ‘Bout My Generation, (the 6 part series we ran during #PokemonWeek.) Just like in the last series, we will be talking about, yep you guessed it Pokémon! Except this time instead of talking about one particular Pokémon per generation, in this series we’re talking about the many Pokémon of Sun & Moon. So to kick off the second instalment, let’s talk about Popplio!

Why Popplio you may ask? Well I was partially tempted to do Litten as a follow-up to our last edition (Rowlet,) but given as how that would be the expected move, and he fact that Litten pretty much looks like the kitty version of Houndour, Popplio felt like the best choice, despite all the hate he’s been getting lately. (Seriously what is all of that about? Popplio may not be the best looking starter we’ve ever seen in a Pokémon game, but that in no way entitles us to abuse him as we wish!)

Thankfully not everyone does hate Popplio, as there is still a large enough fanbase who are showing him plenty of hate to make up for all the hate. So what if Rowlet is cute and Litten looks awesome? That is no reason to write Popplio off just yet, he could turn out to be totally awesome like Swampert and Greninja. And who cares if he looks like a clown and not in a funny way? That’s no reason for many of us to band together and “beat” on this digital creation with bat-shaped memes.

Me personally, I find it hard to see what so many hate about the Pokémon, because as soon as I saw the little fella, all I could think was “THAT is the starter for me!” Sure Popplio is different, but what is wrong with that? We’re all quirky, goofy and vastly different from one another and that’s great, so to get a new starter just like the rest of us is terrific news! Besides Popplio is just the beginning, the unevolved version of what could turn out to be a truly badass Sea Lion. Need I remind you of the leak we had last week where it was uncovered that Popplio could go on to become a Water/Fighting-type Pokémon? A Pokémon who would follow in the footsteps of Poliwrath and Keldeo and given as how Keldeo was something of a let-down, I have every faith that Popplio could in fact turn out to be one of the best Pokémon we see in Sun & Moon. (Plus being a Water-type, it means he’ll be able to learn Surf at a later point in the game and last time I checked, the Alola region has a whole lot of water!)

From what we have seen so far, Popplio comes across as being a Pokémon that will come in handy and turn out to be one of the better starters you could choose, despite the fact that it being a region made up of islands that most Pokémon you would expect to be mostly Water, Bug, Flying and Ground-type. Plus being a Water-type, it means whenever I undergo a battle against a trainer who chose Litten, I’ll have type advantage in my favour, so the second you talk smack about my pal Popplio, I’ll have him bust out a powerful Hydro Pump (or Bubble, Litten could use a bubble bath.) So yeah, don’t right Popplio off just yet, because this Sea Lion isn’t afraid to bite back, just you wait!

We have reached the end of today’s edition of Talking ‘Bout The Next Generation, so unless an all-new Pokémon is revealed next week as part of the June 2nd Sun & Moon news reveal, we’re going to leave the choice up to you as to which Pokémon we talk about in the next issue. (Litten, “Solgaleo,” “Lunaala”) So if there is an option there that you do want us to talk about, make sure you comment that specific Pokémon below and should you wish for more factual information regarding Popplio, be sure to check out our Popplio edition of “Who’s That Pokémon?” Lastly, given as how you had to sit there listening what I had to say about Popplio, feel free to return the favour by commenting as much or as little as you want about the new Water starter.