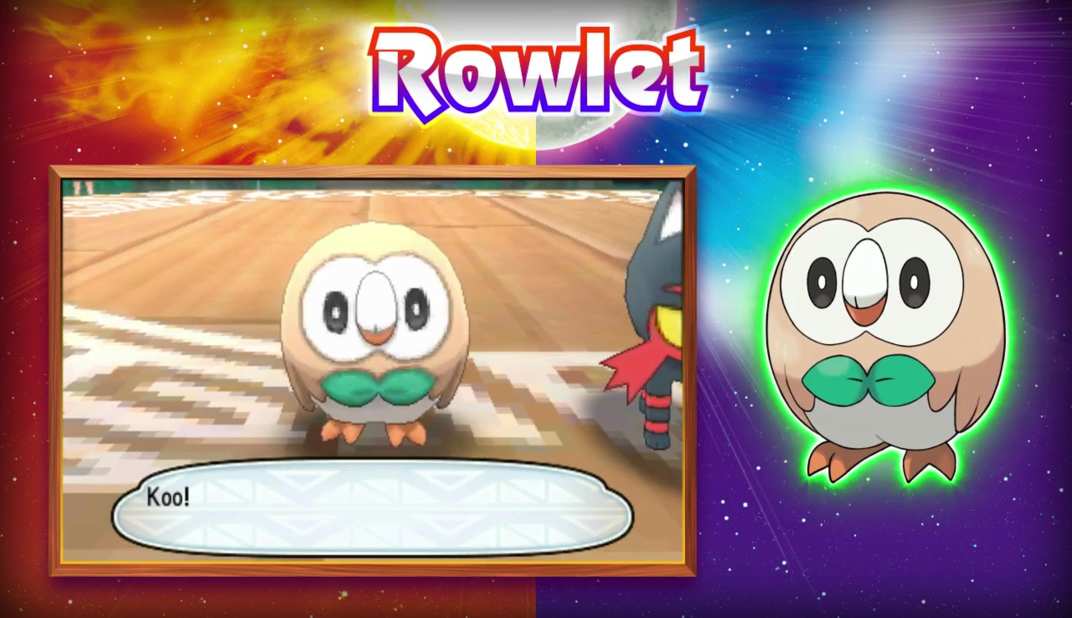 Talking ‘Bout The Next Generation: Gen VII – Rowlet (The Pokémon Of Sun & Moon)

Hello and welcome to “Talking ‘Bout The Next Generation,” the new feature series and follow up to Talking ‘Bout My Generation, the 6 part series we ran during #PokemonWeek. Just like in the last series, we will be talking about Pokémon, except this time instead of one Pokémon per generation, we’re going to be covering the many Pokémon of Sun & Moon. So to kick off the first instalment, let’s talk about Rowlet!

Rowlet as we all now know, is one of three new starters for Sun & Moon, (the other two of course being Litten and Popplio.) Rowlet the Grass Quill Pokémon is a Grass/Flying-type, who out of the other two, knows an all new move for the new game, a move called Leafage.

Ever since we first learned of this new instalment back in February, we have all been wondering what the new starter would look like and what it would be called. Some designs and names weren’t so bad, but some were just terrible and after seeing enough, I was feeling a bit put off about this game, but then when got the footage of the game in action! For the first time since Sun & Moon’s announcement, we were getting official confirmation of the starters, learning not just what they actually look like, but their names too.

When I saw the starters for X&Y, I wasn’t impressed, but these guys, even though they do look more like something from a Digimon game, they looked more like Pokémon than a lot we’ve seen in the last couple of years, but more than that, I could actually picture myself wanting to play them. I like owls, I really do, Octowl still is my favourite Flying-type from Gen II and looking at Rowlet, I can see him evolving into a Pokémon a lot like Octowl and with that, I can see myself teaching him fly and taking to the skies of Alola.

Sure Litten is cute and so is Popplio, who is actually my first choice of a starter, but Rowlet is the first Grass-type starter from the last couple of games, that I really like the look of. Much better then Chespin, Treeko, Turtwig, Chikorita and even Snivy. Sure most of them went on to have a great final form, but I just didn’t like them and instead went down the Fire or Water route instead. But Rowlet is certainly a Pokémon I can see myself taking to two Gyms and doing some damage and since Rowlet already has one new move, I wouldn’t be surprised if his final form learns an entirely new move too which also does some damage. Sure Litten and Popplio will also get a new move as well in their final form, I’m actually excited about seeing what it could be. So looking over all of this now, Rowlet is certainly a Pokémon I want to add to my party, even if I have to start a new game three times, just to have them all!

We have reached the end of today’s edition of Talking ‘Bout The Next Generation, if you have any requests of what Pokémon we cover in the next edition, (Meowth, Popplio, Litten,) be sure to comment below. Or you could even pick Lunaala and Solgaleo (trademark names which are liable to change,) the choice is yours and should you wish for more factual information regarding Rowlet, be sure to check out our Rowlet edition of “Who’s That Pokémon?” And seeing as how you had to sit there listening what I had to say about Rowlet, feel free to return the favour by commenting as much or as little as you want about the new Grass/Flying starter.