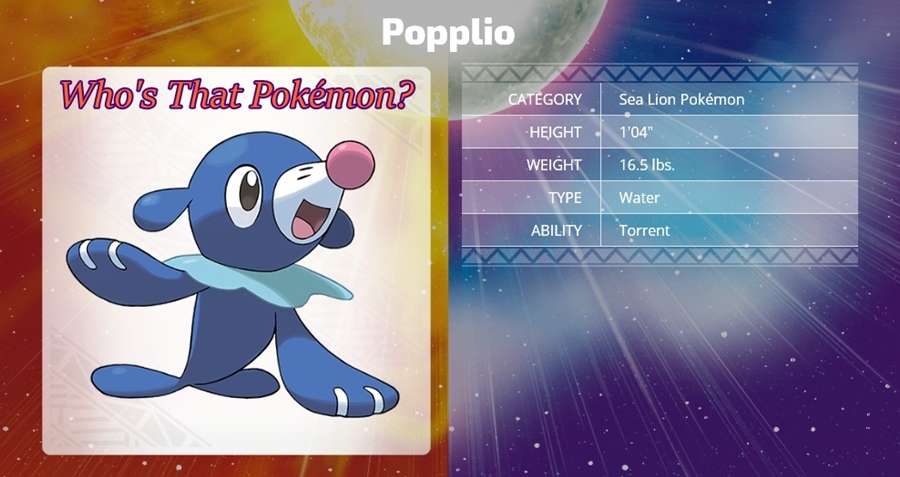 With details of the release date and the identity of the starter Pokémon for Pokémon Sun & Moon and it being #PokemonWeek here on Miketendo64, we’re going to be playing “Who’s That Pokémon?” as a means of getting to know each one of the starters. So to finish us off as we have already covered Rowlet and Litten, it’s Popplio!

Description: Popplio’s swimming speed is known to exceed 25 mph. It’s better at moving in the water than on land. Still, when it’s on land, it takes advantage of the elasticity of its balloons to perform acrobatic stunts and jumps. Popplio can snort out balloons made of water! Watch it spin water balloons into a playful battle strategy! Both frivolous and hard-working, Popplio can easily get carried away—unleashing enough power in battle to make quite a spectacle! But Popplio’s determined spirit means it can usually be found practicing hard on its balloon skills. The Water Gun move attacks an opponent by firing a jet of water. Popplio knows this move from the moment it becomes your partner!

Sadly that’s all the information we have on Popplio, but more is expected information is expected CoroCoro Magazine’s big Pokémon Sun & Moon scope is revealed within the next few days. However Popplio does in fact end our little series, for now. Should any other Pokémon make themselves known between now and November, when Sun & Moon releases, we might bust out a few more of these!