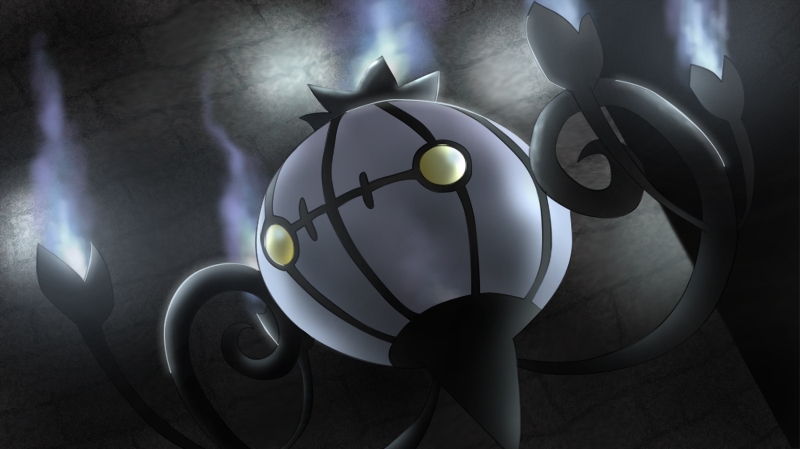 With it being #PokemonWeek here on Miketendo64, we’re continuing with our 6 part series in which sees us talking about one Pokémon from each Generation and what with the release of Pokkén Tournament back in February, it’s only fitting the six Pokémon we chose to cover, are fighters you can use in the game. In today’s edition, we’re heading to the region of Unova, home of the one and only Gen V Pokémon, Chandelure!

I’m never been a fan of this Pokémon at all, it’s one thing to have an ice cream as a Pokémon and another to have a bag of rubbish, but a chandelier, really? Chandeliers can be Pokémon too? But then I saw Chandelure in Pokkén Tournament and I was really scratching my head. I just couldn’t understand how Chandelure made it into the game, because in no way does it look like your usual fighter, but maybe that’s why it was chosen, because it’s different. Because it is nothing like the other fighters and offers a whole new experience and if you put in the time to learn Chandelure’s moves, it can actually be fun to use.

As far as the main games go, I’ve never had a Chandelure, but that said, Chandelure was actually a Pokémon I did use quite often when playing Pokémon Rumble for Wii U and on quite a few occasions, Chandelure did save my butt, so for that I do find Chandelure to be more appealing than Sceptile, plus it’s a Ghost/Fire-typed Pokémon, which is just an awesome pairing as there really aren’t enough Ghost-type Pokémon, but if Chandelure and Gengar were to battle, I’m sorry Chandelure but even with your moves, my money is on Gengar!

Although despite my distaste for Chandelure’s appearance (literally being a haunted chandelier, something which is not his fault,) the colour of the flames are hauntingly beautiful. If it wasn’t for the black and purple/blue flames, this Pokémon would not be Ghost Pokémon it is now. The colour of its flames are just something out of an old ghost story, which is exactly the case as Chandelure is based on Hitodama (human souls that appear as balls of an eerie, ghostly flames, much like a will-o’-the-wisp.) But then there’s its Shiny form which sees it swap its darkened flames, for flames that burn the usual orange and red, making it look more like a Fire-type Pokémon. The only thing worse than a Chandelure, it’s a Shiny Chandelure because it just loses everything that made it such an eerie looking Pokémon.

Another good thing about Chandelure is it certainly is a Pokémon that got a better with evolving. I know most of them do anyway, but let’s just go over those in its evolutionary line. First there is Litwick, a Pokémon that is literally a candle. Litwick then evolves into and Lampert, who to me, just looks like the top part of a streetlight before redeeming himself into the better looking Chandelure and I think this Ghost/Fire-type can hear me because halfway through writing all of this, power has gone out and I’ve spent the last 20 minutes sitting in near complete darkness. I would actually like to continue writing about this Pokémon, but with my computer on low battery already, I think it’s time to call it job down and end the whole thing here while I still can and save it.

We have come to the end of today’s edition of Talking ‘Bout My Generation, if you have any Pokémon or more specifically, any Chandelure stories you don’t mind sharing, please feel free to do so in the comments and be sure to come back tomorrow when we’ll be finishing the series as we head into Gen VI and talk about Braixen!