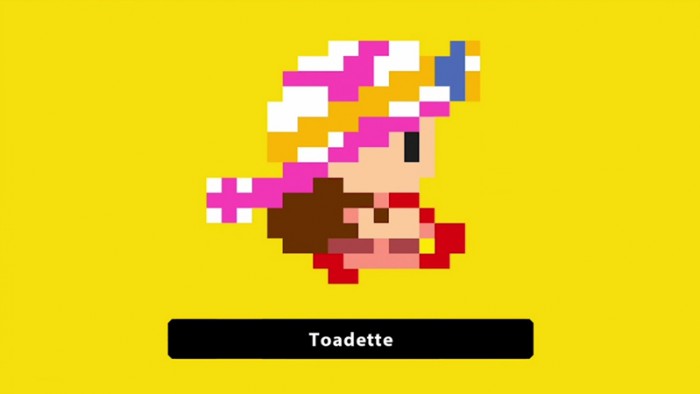 Well the Super Mario Maker Mushroom Kingdom was starting to look a little bit like an all-male Toad party, but now the sausage fest has become a little less so thanks to the release of the newest costume to come to the game, Toadette.

Toadette, of Captain Toad: Treasure Tracker fame, made her debut appearance in 2003’s Mario Kart: Double Dash!! And like Princess Daisy, and was one of the characters that SMM fans the world over, felt was missing from the game. In fact around the time we were waiting for Daisy to finally be announced, popular belief thought Toadette and Daisy would be costume numbers #119 and #120 and despite Daisy’s arrival at last, Toadette was nowhere to be seen, until now.

Out now, Toadette is busting her moves in an event course all of her own, and if you haven’t checked her course out yet, you can find the description below, along with her character trailer:

Captain Toad: Treasure Tracker is back with another special course, and this time it’s the Captain’s treasure hunting partner Toadette who’s taking center stage! Do you have what it takes to dodge gigantic Spike Pillars, collect Pink Coins, and make it to the bounty of golden treasure at the course’s end?

With the first female Toad making her way into the game, she steals herself the #129 spot, leaving #130 and #131 open for anyone to take them and with the Shadow amiibo Mewtwo card not being compatible with Super Mario Maker, it looks like the dark version of Mewtwo will not be making an appearance any time soon, but that’s no reason to rule him out just yet!

However Toadette isn’t the only costume to be announced this week as Barbara the Bat is about to be joined by fellow Yu Ayasaki, also of Daigasso! Band Brothers and you can expect to unlock her costume by beating the next event course, which is due out on the 21st of March and you can catch her character trailer below:

What’s more is Super Mario Maker has also received a minor update this week as well, in the form of version 1.41 which not only helps enhance performance, but also includes changes to the Wolf Link costume, in the form of translating it into the language you play your Wii U in.

With Yu finishing off the #121-#130 row, the focus turns to #131. Will this be the next event course unlockable or will that pleasure go to #145, leaving #131 to be another amiibo unlock that we have yet to hear about? We’ll soon find out in due time.

One thought on “Gender Equality For All Shrooms! Toadette Comes To Super Mario Maker”