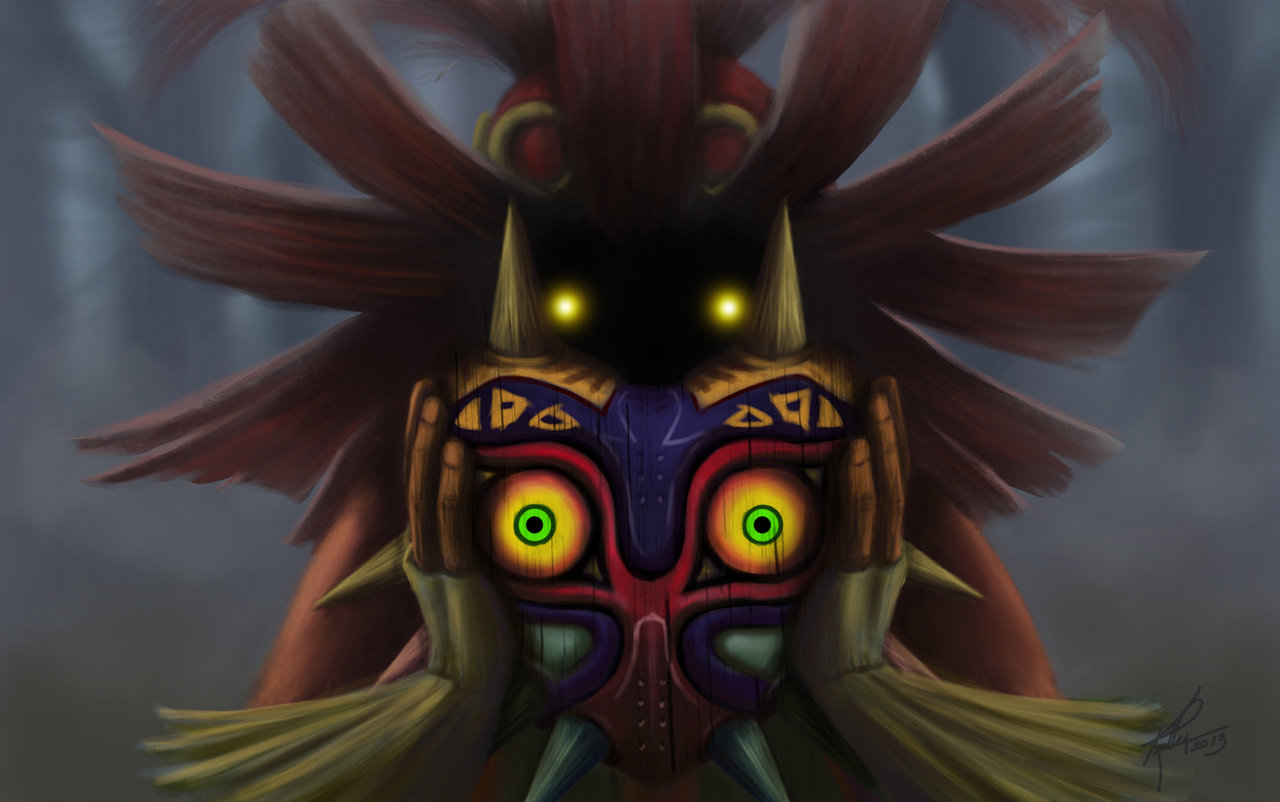 The Masks of Majora & The Other Demon King

There is no doubt about it, Majora’s Mask is a game that is not without its own mysteries. Just where does Termina fall in? Just where does the Majora’s Mask come from? And that’s not forget that other question, Is Link Dead? Well in this piece, we are going to be talking all about that, including other events, so let’s dive in?

Is Link dead? No, he isn’t, he’s alive and there aren’t just one but two plausible theories, which act as the answer to the next question, which is to be further elaborated on in the later paragraphs.

Just where does Termina take place? Now many would argue it is a purgatory, or an alternate reality, but as seen in ALBW, although an alternative Hyrule does exist, it also once had its own Triforce, which is something Termina doesn’t have. However one thing that does add up in all the theories is that in the beginning of the game, Link appears as if he is travelling the Lost Woods, so I put it to you, what if Termina isn’t the other side of the Lost Woods, or in it, but a creation of it?

Like they said in Ocarina of Time, anyone who isn’t a Kokiri who adventures into the Lost Woods becomes either a Stalfos if they are adults, or a Skull kid if they are a child and well, Termina could very easily be the reason why. The Lost Woods would have a manner of fauna growing in it, such as mushrooms whose fungus emits a certain spore that could act as a hallucinogenic, which makes the recipient envision a world, created to represent their personal experiences and incorporate the faces of those they have seen.

Then in the dream state world, similar to that of Link’s Awakening, the unconscious traveller is put through trials and a series of maddening events that will test their sanity, making them lose all their humanity until they become something that is no longer human, something like a Stalfos. And having spent as much time as he has done in the Lost Woods, Link was bound to find himself undergoing the same situation, especially when traipsing through the forest without a Kokiri companion.

However, all that aside, there is another possibility, one that would suggest that Termina is not the creation of both the Lost Woods and the Majora’s Mask, but a Demon who has created a world where they are God. Where time is theirs to control and their prized object can be obtained, a Demon we know as the Happy Mask Salesman, the other Demon King.

As much as I want to continue on that theory, we need to stick a pin in it for the moment, so that we can establish the backstory behind it, but we can only do that, by answering the next question, so let’s answer it.

Where does the Majora’s Mask come from? My answer, Lorule. Lotopia to be exact. I touched on this in my Ravio piece, but for the sake of repetition, I theorised that if Hyrule has Lorule, then it stands to reason that Hytopia has Lotopia, a fashion forward land where instead of also being about fancy costumes, its dominated by masks, why show off when you can hide yourfelf away? And with Lorule being an opposite, this is something that makes a lot of sense, especially when in ALBW it is mentioned that there are those who wear masks to hide themselves from the monsters that are roaming the land. My theory is, the Majora’s Mask comes from all of these, from Termina no less, except now it has a different name.

Even in an alternate world, Ganon is still known to those among it and the antagonist Yuga, a sorcerer many believe to be a Demon that not only knows of the Demon King, but seeks to revive him, much like how Councillor Cole sought to revive the Demon King Malladus, in Spirit Tracks. Furthermore it is worth noting that both Cole and Yuga also act in a similar manner, getting close to the princess and double crossing her for his own plans, restoring their master back to the world, which is also something Ghirahim did in Skyward Sword. All three also bare a resemblance to one another, with Yuga having very strong ties to Ganondorf. Believed to be his counterpart, it is possible, as his actions also mirror those of Ganondorf in OoT, but then there is the similarities to Phantom Ganondorf. Both are connected to Ganondorf, with Phantom Ganon being his duplicate and Yuga his “Lorulean counterpart.” They both can creative copies of themselves, have power over paintings and use electric attacks against Link.

But is Yuga a Lorulean double of Ganondorf, or is he in fact the double of Ghirahim? Both Demise’s sword and Yuga’s robes possess the symbol of the Lorulean Triforce and that Yuga and Agahnim are merely pawns, lesser “Demons,” put in place to ensure the current Demon King’s resurrection. And where arguably one would say this has all gone off topic, fear not, for if there is one Demon agent acting in Lorule, there could be another, serving another Demon King. A Demon who is out to collect only the most powerful masks and in order to get them, worlds like Termina need to be created. A world facing destruction, where a hero could be made to gather masks to create the perfect one, or a world where masks are already implemented, such as Lorule, where the assembled masks went on to create the The Majora’s Mask hailing from Lorule. Then there’s the Fierce Deity Mask assembled in Termina, which comes from the Moon children, whom resemble the Happy Mask Salesman and as for the other mask, why it’s only the Fused Shadow.

Even in its truest form, when the true ruler of the Twili, wore the mask and fought against Ganondorf, Midna just wasn’t strong enough, hinting that one all-powerful mask wouldn’t cut it alone, but three would be needed, just like with the Triforce and so with one Demon King already crowned, the only way for one to become King is to defeat the other one. Now this is where it gets tricky because either the Happy Mask Salesman is Malladus, who at this time is not yet a Demon King, but a Demon Lord, or he is just a servant to Malladus, like Cole was, but a servant charged with the duty of collecting the masks so that should Ganon be revived, Malladus would have the means of battling the Demon King and winning, thus taking his crown. A theory that does connect due to the fact that OoT, MM and TP all tie into the same timeline, with WW serving as the alternative, in which sees Ganondorf defeated and with ST set 100 years later on, Malladus no longer needs his masks and is unchallenged in claiming the crown for himself.

Either way, who better to go round collecting masks, than a mask salesman? No one would ask any questions, or have their suspicions aroused and you’ve got to admit, the way he acts, he’s expressions there is certainly more to him than meets the eye. But all this is just my theory, feel free to cut it down to shreds internet, you’re good at that. And just before I sign off, The HMS also made an appearance in Oracle of Ages, which is a continuation to ALTTP, another game which features Demons and Demon Kings, which ties in his every appearance during a time a Demon King is present, or has been defeated.